The IFFM recently announced the Official Selection for its Virtual Events happening online from November 19 to 22, 2020, presented by LFP International Production Inc and co-presented by Tagline International, Oncue Media, and Binary.

“Decision to do so was because of the lockdowns and limited travel around the world due to the Pandemic. There is also lack of live events happening in NY. Meanwhile, we plan to do meaningful (for the filmmakers and audience alike) Virtual Events Online.

“Doing the festival virtually will give us the opportunity of reaching a new audience beyond the borders of Manhattan NY. It gave us hope. Thus, we have our theme this year as ‘Digital Hope.'”

IFFM’s Pedron, a Filipino-American actor and filmmaker based in New York City, has been organizing events to support Filipino artistry.

“I will always feature Filipino films as part of my festival programming not only because I’m proud of being Filipino but because I am proud of the artistry of Filipino Filmmakers! Mabuhay ang Pelikulang Pilipino!”

The Filipino productions will be showcased along with the world’s best films in the New York-based festival that champions diversity in films. Other countries represented in the IFFM 2020 are USA, Canada, Bulgaria, Estonia, India, Japan, Colombia, Spain, Germany, Macau, China, Russia, Italy, Myanmar, Tibet, Austria, and Switzerland.

The topics and genre covered in the festival include the global pandemic due to the Corona Virus, senior issues, depression, health care system, beauty pageantry, military, war, crime, drama, and horror.

The following are the Filipino films that were selected from the hundreds of submissions from around the world: 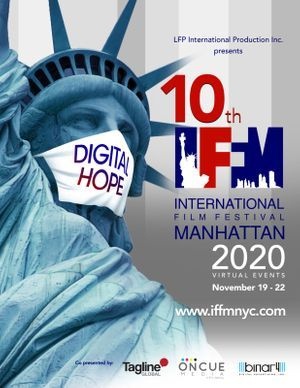 IFFM this year we will be honoring Veteran Award-Winning Filipino Director Louie Ignacio as the Lifetime Achievement Awardee.

A Posthumous Award will be given to Frontliner Occupational Therapist / Award-Winning Filmmaker / Co-Founder of the International Film Festival Manhattan Filipino American Gerry Balasta who passed away due to Covid 19 last March 2020.

The IFFM Virtual Events 2020 Schedule of events and tickets will be announced on www.IFFMNYC.com

SEND CONGRATULATIONS in the comments below to the Filipino films showcased in the International Film Festival Manhattan Virtual Events 2020.