Broadway and West End royalty, Lea Salonga, is back in the United Kingdom for her first ever solo concert tour – 30 years after she debuted on London’s West End as Kim in Miss Saigon.

The multi-awarded singer and actress is on a 7-show run for “Lea Salonga In Concert: The Original Miss Saigon Returns” this July.

Lea Salonga, an Olivier and Tony Award winner, started off her UK solo concert tour with a special treat for audiences. Simon Bowman, who played Chris opposite Lea’s Kim in the original West End production of Miss Saigon in 1989, was in the audience on July 7 at Cardiff’s Wales Millennium Centre. Bowman went on stage to join Salonga as they sang a duet of the Filipina Disney Princess’ hit song from Aladdin, A Whole New World.

Lea Salonga remarked after her duet with Bowman, “It was an absolute pleasure to welcome Simon on stage to perform with me this evening. It was a very special moment for me at the start of my debut UK solo tour and I think the audience enjoyed it too!”

“Lea Salonga In Concert” had its second stage on July 10 at Nottingham’s Royal Concert Hall. The Filipina celebrity was last seen in London at the 25th-anniversary celebrations for Miss Saigon at the Prince Edward Theatre.

Here is the schedule for 5 more shows of the Lea Salonga solo concert UK tour:

Tickets for the Lea Salonga UK concerts are available through this link. 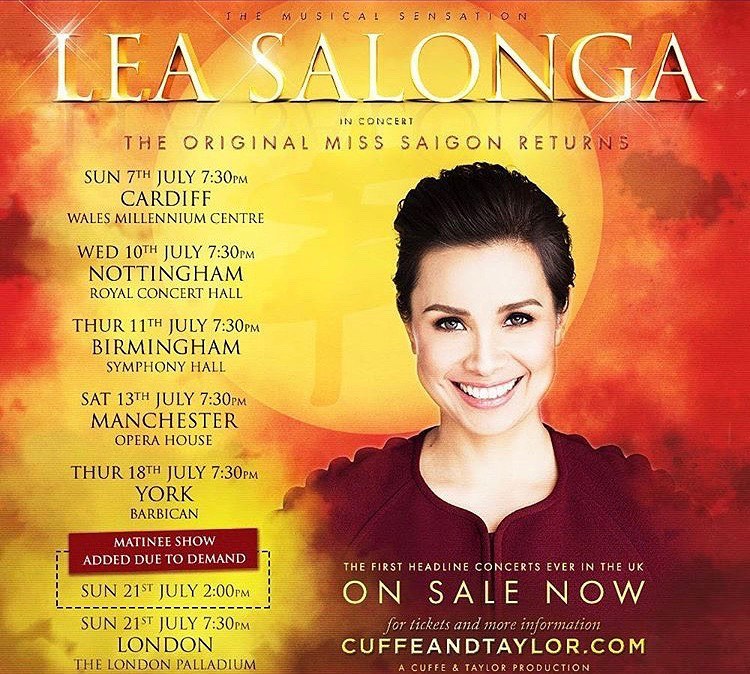 WATCH Miss Saigon original stars Lea Salonga and Simon Bowman in this video and SEND well wishes in the comments below for Lea Salonga, our musical theatre royalty showing excellence on the world’s concert stage!