A new butterfly species on Negros Island has been discovered by Filipino biologist Jade Aster Badon of Silliman University in Dumaguete.

Badon’s research about the new subspecies of butterfly endemic to the Philippines was published this June on the entomological journal, Nachrichten des Entomologischen Vereins Apollo (NEVA), in Germany.

The college instructor spotted the new butterfly when he hiked Mt. Talinis way back in 2012 where he conducted his research expedition. Badon then collected specimens around the Lake Nailig near the summit and brought them to the McGuire Center for Lepidoptera & Biodiversity in Florida, U.S.A. where he was taking his master’s degree.

It was only when the Silliman professor attended a wildlife conservation symposium in Leyte in August 2019 when he realized it was a completely new subspecies of the Appias phoebe.

“I attended the annual Philippine Biodiversity Symposium at the Visayas State University in Leyte,” Badon, who is also the Philippine Lepidoptera Butterflies and Moths, Incorporated, told the media on June 18, 2020.

“I scanned the pages of my book again and saw that my discovery looks different than the ones I saw from other publications. So I did my research and found that there is no collection of that subspecies,” Badon added.

The college instructor also added, “The one here in South Negros is distinctly different from the other subspecies in the country.”

The discovery of new species in Philippine flora and fauna has been making headlines recently.

The new species of Corybas circinatus or helmet orchid was discovered in the mountain areas of Palawan island.

An endemic 8-foot-7-inch Amorphophallus rostratus flower species was spotted by park rangers at the Masungi Georeserve in Baras town of Rizal province.

SEND CHEERS in the comments below to the people of Negros Island and the Silliman University community for the new discovery of a butterfly species. 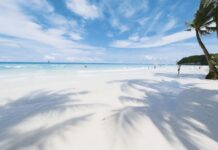