The four leading higher education institutions in the country have been ranked by the world’s most popular source of comparative data about university performance offered to students, entering the list in 2012 in the same leaders’ sequence for the Philippines then and now in the newest release this June 2022: UP 1st, ADMU 2nd, DLSU and UST both in 3rd.

The QS WUR 2023, led also for the 11th year by the Massachusetts Institute of Technology (MIT) of the United States, ranked almost 1,500 universities around the world with institutions assessed across categories or indicators that capture university performance: Academic reputation, Employer reputation, Faculty/student ratio, Citations per faculty, International student ratio, and International faculty ratio.

This year’s QS ranking reveals two new indicators – International Research Network and Employment Outcomes – to gather feedback from institutions ahead of its full inclusion in next year’s edition. The two categories’ scores did not affect the overall score of the universities.

The University of the Philippines whose flagship campus is in Diliman, Quezon City, maintained its top spot in the country staying in the top 500 global universities despite falling to #412, 13 notches down from last year’s #399.

The state university entered the QS WUR in 2012 at #348, UP’s highest ranking. This year’s rank is its lowest in 11 editions.

The Jesuit-run university in Katipunan, Quezon City, entered the QS WUR in 2012 at the #451-500 bracket, its highest ranking in 11 years. This year’s ranking which matches its 2019 spot is its lowest. 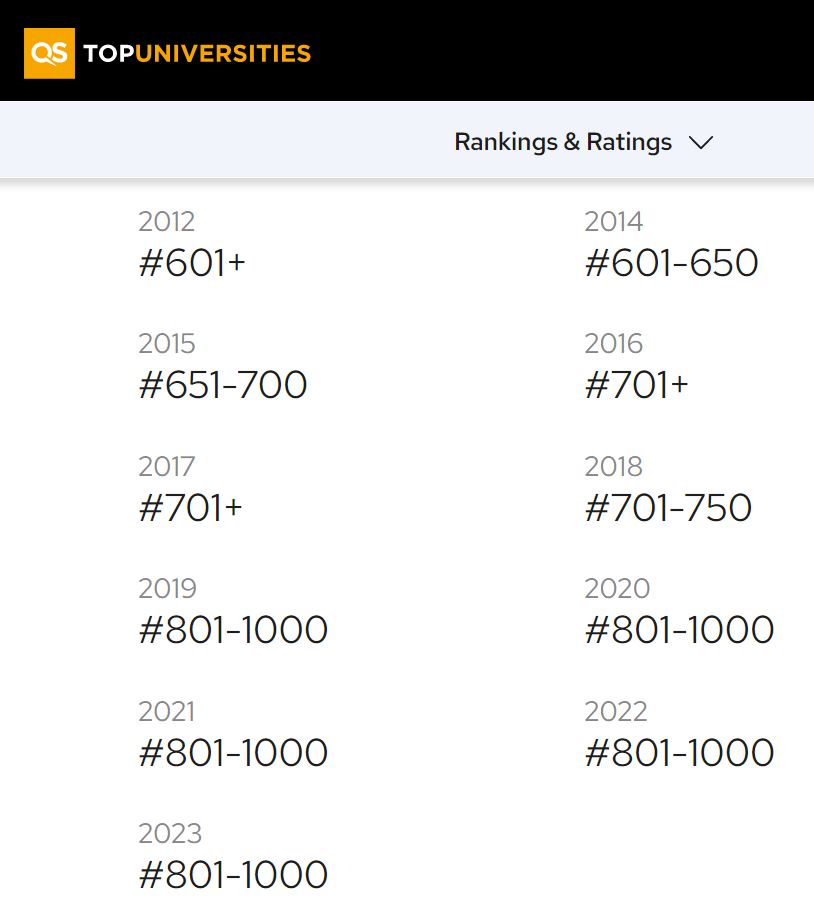 De La Salle University ranks 3rd in the Philippines at the #801-1000 bracket, its grouping since the 2019 edition.

The Lasallian Brothers-run Manila university entered the QS WUR in 2012 at the #601+ grouping, its highest spot in the ranking. This year’s ranking is its lowest.

The University of Santo Tomas ranks in joint 3rd in the Philippines at the #801-1000 bracket, its grouping since the 2018 edition.

The Dominican Order-run Manila university entered the QS WUR in 2012 at the #601+ grouping, its highest spot in the ranking. This year’s ranking which the university has held since 2018 is its lowest.

The QS WUR describes its analysis as using data based on high-quality research and innovative analytic approaches. “Our solid relationships with tens of thousands of higher education institutions and employers enable us to build our rankings using data from over 14.7 million academic papers, as well as 130,000 academics and 75,000 employers’ responses,” according to its website.

SEND CONGRATULATIONS in the comments below to the Philippines’ Big 4 universities UP, ADMU, DLSU, and UST for marking their 11th year on the QS top global ranking!