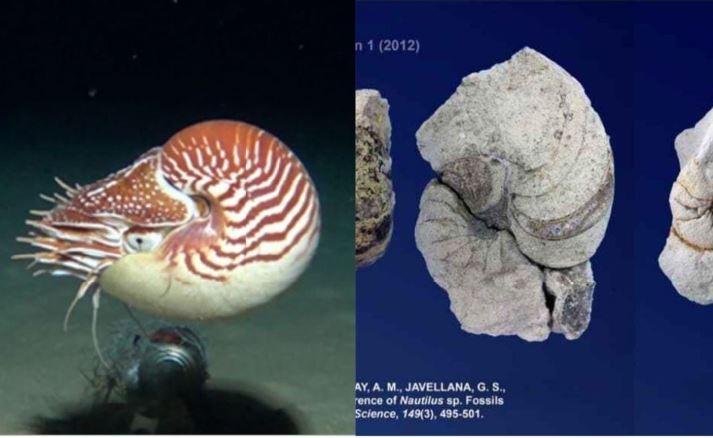 The Philippines’ oldest Nautilus sp. fossils have been discovered by a team of researchers from the University of the Philippines Diliman, the National Museum, and the President Ramon Magsaysay State University Candelaria in Zambales.

The discovery of the oldest fossils of the Nautilus sp., a marine species from the family of octopi, squid, and cuttlefish, which existed some 500 million years ago, was made in Lian, Batangas.

The published research “Rare Occurrence of Nautilus sp. Fossils from Batangas, Philippines” narrates how two nautilus fossils were found by the UP Diliman-led research team during their fieldwork in 2012 and 2018 at Talim Point, Brgy. Matabungkay, Lian, Batangas.

The paper narrates how In 2012, a poorly to moderately preserved nautilid shell was found in a sandstone unit, below a limestone outcrop mapped as part of the Calatagan Marl. Subsequently, another nautilid specimen was found in the same unit in 2018.

“This new discovery of Nautilus specimens from the Neogene deposits in Batangas is important in understanding the evolutionary history of this genus. It was previously believed that nautilids do not have any fossil record during the Pliocene and Pleistocene.”

“The fossils discovered in Batangas so far represent the oldest fossil Nautilus in the Philippines and the only late Miocene to the early Pliocene record of Nautilus in the world that now stored at the Nannoworks Laboratory of the National Institute of Geological Sciences, College of Science, University of the Philippines,” the research team reported.

“They were identified as Nautilus sp. because of the similarity in conch shape and sutures to those of extant species of Nautilus. The specimens were found in a fine- to medium-grained sandstone unit and observed to be associated with other macrofossils such as corals, gastropods, bivalves, brachiopods, and echinoids,” the research team said in the published paper.

“The age of the Nautilus specimens was determined through the analysis of the planktonic foraminifera in the sandstone matrix. These specimens represent the oldest fossil record of Nautilus in the Philippines,” the paper announced.

In 2019, a University of the Philippines-led international archaeology team discovered the fossils of a new human species Homo luzonensis in Callao Cave, Cagayan.

In May 2020, a Megalodon giant shark tooth fossil was turned over to the National Museum after it was discovered in Maribojoc, Bohol.

SEND CONGRATULATIONS to the researchers from UP Diliman, National Museum, and PRM State University for their discovery of the Philippines’ oldest fossils of the Nautilus sp.