The Tullahan-Tinajeros River System dredging project of the Department of Environment and Natural Resources (DENR) and San Miguel Corporation (SMC) was launched Monday to support the Manila Bay Rehabilitation Program.

The river dredging project covers a 5.25-kilometer (km) part of the river system from Barangay Catmon in Malabon City to Barangay Bagumbayan South in Navotas City.

The Tullahan-Tinajeros River System stretches 36.4 kilometers from La Mesa Dam in Quezon City into the Manila Bay at Centennial Park in Navotas City. The river is considered one of the dirtiest tributaries of the Manila Bay.

The dredging project, intended to support the restoration of Manila Bay waters, is also expected to help subside flooding in low-lying areas near the river such as Bulacan province.

At the launch on February 24, 2020, SMC presented its newly acquired brand-new backhoes, cranes, barges, tug boats, and dump trucks that will be used for the dredging project. SMC announced it will also provide manpower and logistics support.

SMC has long been a partner of the DENR in cleanup efforts for the Tullahan river and has pledged P1 billion for this project.

The Manila Bay rehabilitation project seeks to restore the quality of the bay waters in the capital city of the Philippines. Once world-famous for the Manila Bay Sunset, the waters have been polluted by its tributaries like the Tullahan-Tinajeros River System. Estero dredging has also been ongoing, including the recently completed work at Manila’s longest creek, the Estero de Tripa de Gallina.

SEND CHEERS to SMC, DENR, and everyone involved in the Tullahan-Tinajeros dredging project to help support the Manila Bay Rehabilitation Program! 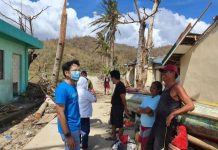