Evangelista shared her story of pursuing her dreams to inspire others to persevere and work hard to achieve their goals as she graduated as the Class of 2022 Valedictorian of the UP College of Social Work and Community Development, the college where she also served as a member of the Psychosocial Support team of the university’s Volunteer Service Program.

Earning the highest academic distinction bestowed upon a student with her weighted average grade of 1.20, the new graduate with a Bachelor of Science degree in Social Work was among the 150 recipients of the Latin top honors at the UP Diliman graduation ceremonies held at the University Amphitheater last July 31, the university’s first in-person graduation in two years since the Covid-19 pandemic struck.

Prior to the graduation rites, UP Diliman’s social media posted personal stories about its top graduates, including that of Gia Evangelista who revealed that she failed to pass the university’s highly competitive admission exam that determines the top 15% of passers among thousands of examinees who take the examination to gain entry into the state university.

READ: Why the University of the Philippines UPCAT draws over 100k students

The fresh graduate revealed in media interviews that despite failing the UPCAT she was admitted to her dream school in 2018 through the Iskolar ng Bayan Act of 2014, a scholarship program for the Top 10 Filipino public high school graduates that allows automatic admission for first-year students.

“I did not pass UPCAT, and it has been my greatest insecurity as a UP student. But being here today, not as an SCL but simply as a graduating student, means that if there’s one thing that UPCAT has failed to measure, it’s my grit,” Gia Santos Evangelista said in a Facebook post shared by UP Diliman.

“This is for everyone that has failed. Do not let it define you, let it fuel you. Your time will come,” she told Philippine Star.

Evangelista says she dedicates her achievement to her family and friends.

“I would like to share this honor with my family, who have supported me unconditionally (though I think they’re secretly clueless about my course); my friends, who have made this journey fun and bearable; my person, who has been my constant through it all; and to the Filipino people, to whom I owe this education to,” Evangelista said. 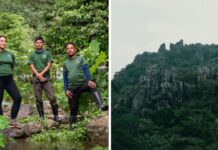