University of the Philippines professor Dr. Maria Antonia Tanchuling has been featured in a World Bank report on World Oceans Day 2020 as an innovator helping protect the Philippines’ oceans.

Dr. Tanchuling, Director of the Institute of Civil Engineering (UP ICE) and faculty of the Environmental Engineering Graduate Program at UP Diliman, was described in the June 8, 2020, World Bank report as someone who “understands better than most how the tiniest of things can impact our oceans, which is why her work studying the impacts of microplastics is so crucial to future ocean health in the Phillippines.”

Tanchuling serves as the Chairperson of the Philippine Association of Tertiary Level Educational Institutions for Environmental Protection and Management, and I am a Principal Engineer at AMH Philippines, an engineering consultancy firm.

The UP professor recounted in the WB interview how she had been working on solid waste management, analyzing where waste goes, which components go where, how much waste gets collected, and how much is reused, recycled, or composted.

The UP ICE director was part of a World Bank program in 2017 to learn about microplastics at The German Federal Institute of Hydrology in Koblenz.

Tanchuling notes how the presence of Microplastics, plastics that are about 5mm small or less, in rivers and lakes poses a risk to living organisms that could mistake the plastics as food.

Tanchuling’s team studied the composition of microplastics in rivers within the National Capital Region that flow into Manila Bay and Laguna Lake, the largest lake in the Philippines, to help determine where waste management interventions should take place.

Antonia Tanchuling is also taking the lead for U.P. in another project called the Integrated Waste Analysis, Survey and Technological Options, or IWASTO (Filipino for ‘Make it Right’), a part of the IM4ManilaBay program funded by the Department of Science and Technology that seeks to rehabilitate Manila Bay.

Project IWASTO looks at the waste management practices of local government units and the reasons why waste ends up in the canals and rivers of the capital, and eventually in Manila Bay.

“We would like to educate and work closely with communities in Manila on proper solid waste management and promote technologies developed by the department. We plan to make information regarding waste practices publicly available through a mobile app and database,” shared Dr. Tanchuling.

Plastics Use in the Time of COVID-19

Dr. Tanchuling notes that the COVID-19 pandemic will be one of the biggest challenges facing the oceans in 2020.

She is concerned that the gains of anti-plastic campaigns may be lost due to health and sanitation measures that help address the COVID-19 pandemic, noting the increased use of plastic disposable bags instead of reusable bags to lessen infection and lockdowns that have caused a spike in deliveries that require more plastic packaging may result in more plastic waste in the oceans. 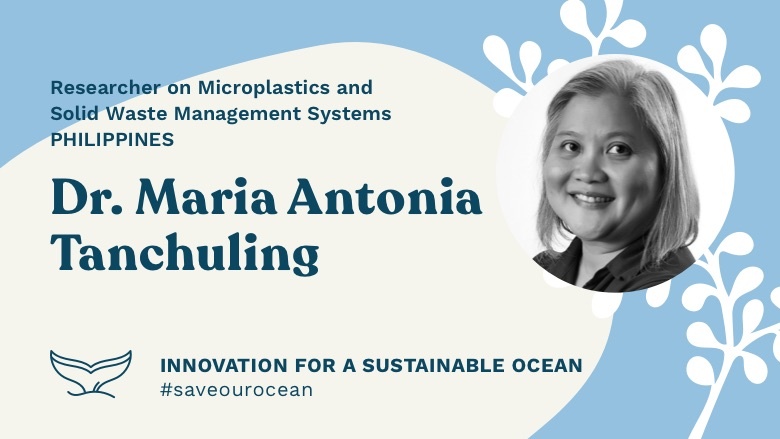 The director of U.P. ICE, which recently celebrated the 110th anniversary of the establishment of the Civil Engineering program at the state university, is concerned about the loss of the gains of the anti-plastics campaigns given the increased demand for disposable plastics in the time of COVID-19.

The Camarines Norte-born Tanchuling credits her upbringing for her love for the sea and nature.

“Plastics should not be strewn about in the beach or floating in the waters. They don’t belong there. Plus of course, the harm plastics cause to marine organisms is terrible,” she declares.

“But I am most passionate about safe water for all because it is the poor who suffer the most from the lack of a clean water supply. Living in poor physical environments exacerbates problems the poor already must face,” shares the alumna of UP, the state university known to be the country’s top university and a bastion of social advocacies for the poor and under-represented sectors.

“All of us have a role to play in taking care of our planet. Small behavioral changes, like opting for reusable grocery bags and water bottles, would help.,” she adds.

Dr. Antonia Tanchuling also challenges leaders to go beyond mere compliance with the law and the value of research in the fight to protect the Philippines’ oceans.

“I’d also like to emphasize the importance of good governance from national to local level. People seem to be discouraged from coming up with creative waste management solutions when the default action is mere compliance.

“An example is the law mandating the establishment of Materials Recovery Facilities in every barangay (village). The law does not include guidance on how the facilities should look or what to use them for, so some local governments build facilities that are not operational but exist just to comply.

“We have so many laws, but we lack the technical capability to enforce them. Information and data should be publicly available for citizens to be aware and empowered to demand more action from the government,” Dr. Antonia Tanchuling says in the World Bank feature.

The UP community has been leading Philippine universities in responding to various national issues, including providing innovative solutions to the COVID-19 pandemic and giving pubic access to its research on Taal Volcano to aid relief and rehabilitation efforts.

SEND CHEERS in the comments below to Dr. Antonia Tanchuling for protecting the Philippines’ oceans.