Historical Manila houses many heritage museums that people visit year round. The month of June is especially popular as it coincides with Philippine Independence anniversary celebrations.

Filipinos in the Philippines and around the world mark June 12 as the declaration of Independence from Spain’s more than 300 hundred years of colonization.

As we celebrate the Philippines’ 121st Independence Day Good News Pilipinas lists Manila Heritage Museums to help everyone look back on how our ancestors lived and died for our motherland.

CHECK OUT San Ignacio Church rising from the ruins of war metamorphosing into Museo de Intramuros.

One of the best ways to reflect on our heroic past is to visit museums that showcase the Filipino way of life during the Spanish regime, American time, and Japanese occupation.

Intramuros in Manila offers several heritage sites, churches, government offices, and museums that witnessed the rise and fall of the Spanish Empire’s capital in the East. It houses, even to this day, important offices of the state and the Roman Catholic Church.

Here are 5 Manila Heritage Museums inside the historic walled city of Intramuros touted “The Noble and Ever Loyal City” and one of the world’s best preserved medieval cities.

The newest heritage museum rises from Intramuros. Credits to the Department of Tourism.

The newly opened Museo de Intramuros in Calle Arzobispo houses hundreds of religious icons and artifacts from the Spanish colonial era. It showcases the deep Catholic faith of Filipinos which started during the 15th century. Museo de Intramuros is open from Tuesday to Sunday and is offering free entrance for 6 months.

The museum showcases mannequins retelling the story of the heroism of the country’s national hero, Jose Rizal.

Casa Manila is located at the Plaza San Luis in General Luna Street. The heritage house represents the usual “bahay na bato (stone house)” of upper-class families in the 19th century the Philippines.

The oldest distillery in the Philippines. Credits to Destileria Limtuaco.

Destileria Limtuaco is the oldest distillery in the Philipines that has been turned into a museum. It houses equipment used in making wines and alcoholic beverages. It is located at 482 San Juan de Letran Street.

GOING TO ILOILO? CHECK OUT The Museum of Philippine Economic History.

GO SEE the Walled City of Intramuros and TELL US in the comments below your experience in visiting Manila’s Heritage Museums! 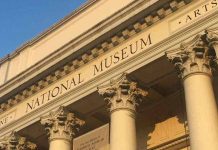