The all-original Filipino musical “Ang Huling El Bimbo” (AHEB) wrapped up its 2nd run on April 14 before a full house on standing ovation for the cast that gave life to the songs of the iconic 90s band, the Eraserheads.

Good News Pilipinas first wrote about the musical staged by Resorts World Manila (RWM) through its production house Full House Theater Company (FHTC) before it started its first run in 2018.

The show returned on stage in March at the grand Newport Performing Arts Theater at Resorts World Manila and ended with an announcement from director Dexter Santos of a new run on May 11-26, 2019, much to the relief of those present who wanted to watch it again or recommend the show to others. The All-Filipino musical is going on its Final Run this July-August, 2019.

WATCH FOR THE COLLECTIVE EXPERIENCE

Going by the full house, standing ovation, appreciative nods, gasps, laughter, and tears – all witnessed at the last staging of Ang Huling El Bimbo on April 14, anyone who is part of the communities of:

Each one would be enchanted by the feeling of shared nostalgia and fresh experience of reliving the music collectively as one community inside the theater.

As expected given that the iconic 90’s Pinoy indie band members Ely Buendia, Raymund Marasigan, Buddy Zabala, and Marcus Adoro are from UP, the iconic UP scenes were there – the dorm life, the rallies, and the Citizen Military Training sequence that elicited the most laughter and attention from the UP crowd.

The young Joy played by Tanya Manalang enthralled the audience with her powerful and passionate singing. Every single time Tanya sang, the crowd quieted down to hear her notes illustrating her yearning and excitement at a bright future – and her pains and anguish at losing her innocence which brought us to tears and anger at the cruelty of life. This fleshing out of Joy’s character in the re-run is very much welcome change from the original run.

Seeing a live band perform music for AHEB cast singing Eraseheads songs brought concert and theater together on a single stage. One gets to feel like being in a concert featuring OPM songs, while being enriched by the cast acting on storylines wrapped around the songs. 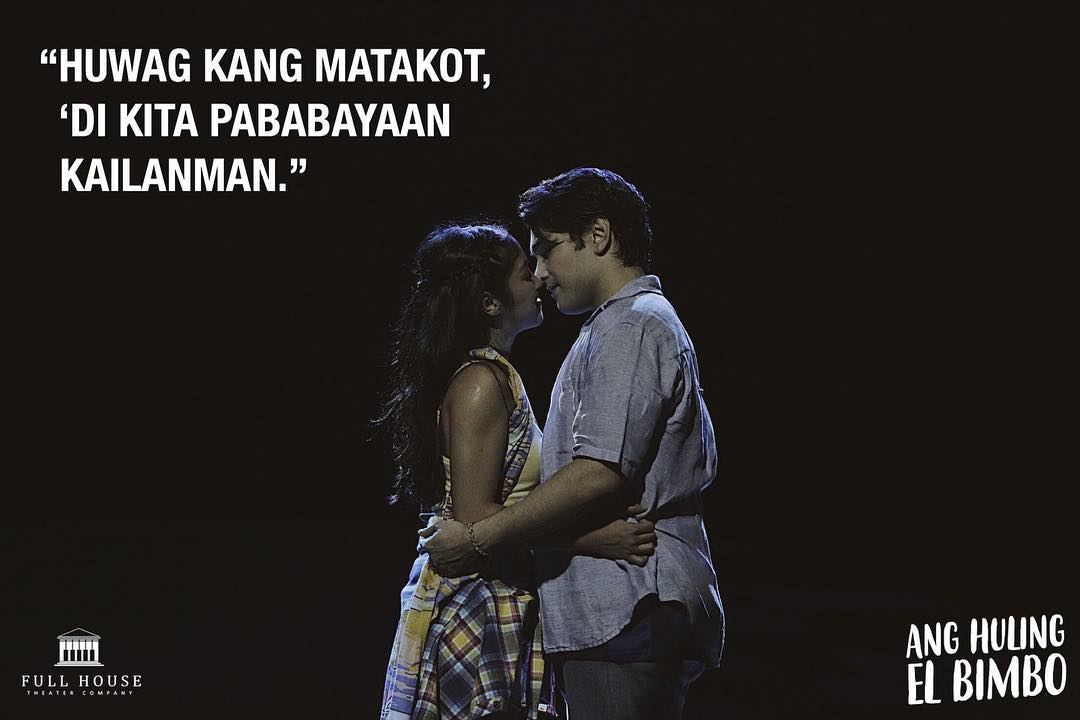 AHEB was a revelation. Act 1 lulled one to thinking this was a feel good show all the way – the youthful yearnings in energetic dance and song. Well, up until that abrupt Act 1 cliffhanger that pushes nostalgia aside and brings one to social reality.

It was an unexpected twist but expected at the same time, given that these songs were after all crafted by youth who were studying in the state university known for youth activism. That is not to say the Eraserheads were activists – they had no declaration to that effect. But the musical thankfully satisfies the thirst for addressing social realities in Act 2.

The crime in focus was personal, yes, but the musical also gives us peeks into the social, economic, and political structures which brought forth the tragedies of unrealized bright futures and unhappiness.

AHEB’s writing by Dingdong Novenario with direction and choreography by Dexter Santos give us food for thought for a post-game analysis of sorts to process the scenes, the reasons, the resolutions provided by the show.

For the vast majority of Eraserheads fans and friends who were used to seeing the 90s band jamming in dorms, performing in university lobbies and halls, and at best at the UP Sunken Garden stage – hearing and seeing the songs come alive at the Newport Performing Arts Theater at Resorts World Manila made one exclaim, “Level up!”

The 1,500-seat theater with the biggest LED screen in Asia extended the show beyond the live movements on stage, painting colors and images complementing the scene, including the nightscape of stars which witnessed that harrowing end of Act 1.

The revolving stage allowed audiences to switch attention and emotion easily as the cast did from one scene to another.

Good News Pilipinas will next take you back to the Final re-run as we cover the restaging of Ang Huling El Bimbo.

WATCH this AHEB video then tell us in the comment section below your Ang Huling El Bimbo moment!