Celebrity hunks Rocco Nacino and Jay Gonzaga have responded to the LIGHT IT FORWARD challenge to hand-build solar lamps for the energy-poor villages in the country.

The LIGHT IT FORWARD project not only seeks to uplift the lives of the poor communities in the Philippines but also to boost the morale of our frontliners by dedicating every hand-built solar light to them.

As more and more well-known people are joining the solar lighting movement, the Liter of Light team asked them to send out messages of hope to essential workers who have impacted their lives during the pandemic.

In just a 20-30 minute assembly process, a solar lamp can provide light to a family and hope to others especially in these trying times.

Nacino and Gonzaga are part of the 120 social media influencers who have shown support to the LIGHT IT FORWARD campaign of brightening the lives of others.

Watch your idols shine the light as they build solar lamps. 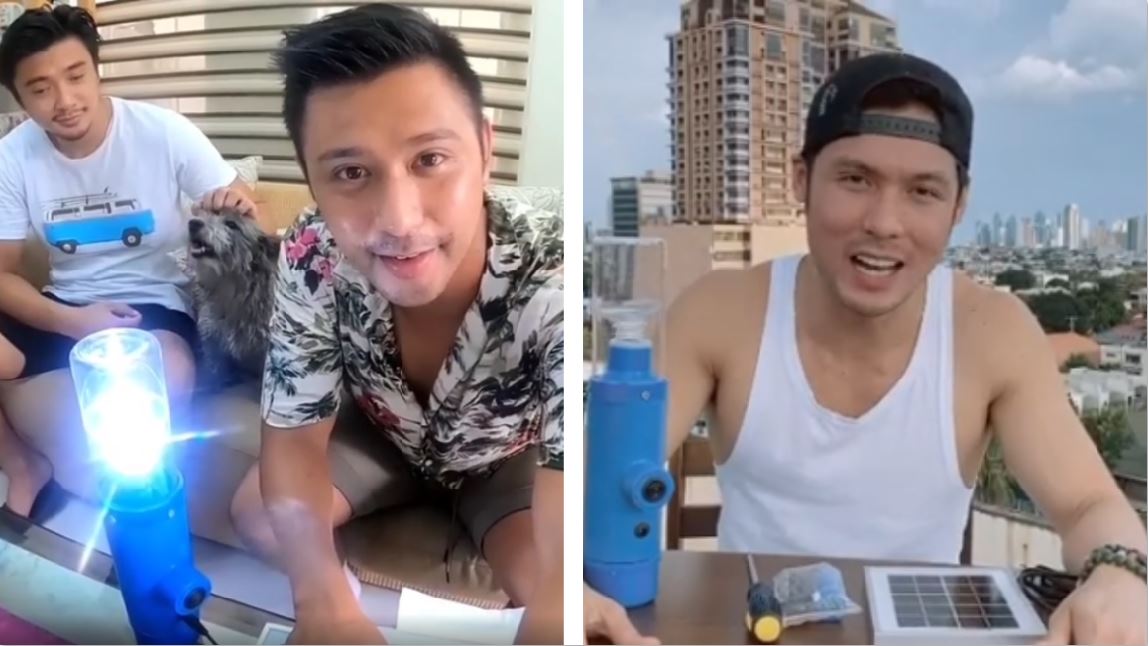 Kapuso actor Rocco Nacino stars as Diego Ramos in the Philippine adaptation of Descendants of the Sun (DOTS), the love interest of another solar challenger Jasmine Curtis-Smith.

The Kapuso hunk made the solar lamp with the help of his engineer brother Kyle Nacino on August 14, 2020, in response to the challenge of fellow DOTS actor Lucho Ayala.

Rocco started off with a short message to everybody saying that upon seeing the video of Lucho, his eyes were opened when it comes to really help people.

(… we have a pandemic, many are suffering even I, but whatever my problems are, others have more difficult ones)

The actor goes on to empathize with the hard situations our fellow Filipinos are experiencing due to the lack of a steady source of electricity.

Nacino began the assembly process by thanking Liter of Light and highlighted the upcycled materials of the lamp.

After a short while, the brothers successfully lit the lamp with much joy and Rocco challenged his brother Kyle to build one for himself as well as his girlfriend Melissa Gohing, Carlo Gonzales, Ruru Madrid, Mikee Quintos, and Buboy Villar.

Thank you buddy @luchoayala_ for challenging me to join this cause! Fun experience for me and Kyle the Engineer! Now I pay it forward! I challenge Kyle Nacino, @gohingmelissa , @jcdgonz , @rurumadrid8 , @mikee , @buboyvillar to experience this as well! Thank you Liter of Light, feels good to know na makakatulong tayo sa nangangailangan ng ilaw sa tahanan nila. #literoflight

Jay Gonzaga is well-known for his role in ABS-CBN’s “Ang Probinsiyano.”

Jay uploaded his video on August 26, 2020, in a time-lapse mode with a beautiful rooftop view.

The Kapamilya actor thanked the Liter of Light and briefly shared the advocacy of the project.

((Thank you very much Liter of Light for this opportunity to help others who don’t have a source of electricity. In just 20 minutes, we can help them provide a solar-powered light.)

In just a few minutes, Gonzaga lit the lamp and he passed on the LIGHT IT FORWARD challenge to his “Ang Probinsiyano” family, Angel Aquino, Mark Manicad, Director Rowell Santiago, and Lorna Tolentino.

These celebrity hunks are part of the 4th batch of solar engineers who accepted the challenge.

The Light it Forward campaign is led by the Liter of Light Foundation in partnership with GoodNewsPilipinas.com and the Rotary Club of Makati Business District.

SEND CHEERS in the comments below to celebrity hunks Rocco Nacino and Jay Gonzaga for responding to the Light it Forward challenge!

JUST IN: University of the Philippines graduates lead over 3.5k new...