The Filipino-American movie “Lumpia With A Vengeance”, the sequel to the 2003 cult classic, has won the Audience Award at the 2020 Hawai’i International Film Festival (HIFF) – giving Fil-Am films back-to-back wins in the Honolulu-based film fest.

The success of “Lumpia With A Vengeance” in the 2020 HIFF follows the feat of another Fil-Am film “Yellow Rose” starring Lea Salonga and Eva Noblezada which also bagged the Audience Award for Best Narrative Feature at the 2019 HIFF.

The new Lumpia film also follows the 2003 success of the homemade movie that became a cult hit in the Filipino American community as it achieved fan-favorite status at the HIFF where it had sold-out screenings for its world premiere in November.

Audiences trooped to watch the action-comedy film of “the egg roll-armed avenger returning to Fogtown as a maid of honor to her own parents’ wedding, teenager Rachel, finds herself tangled up with a crime syndicate selling drugs masked as food. She teams up with the crime fighter to prevent a mysterious crime boss from destroying her town, and her parents’ dream wedding.”

As the 40th HIFF ended its run from November 5-29, the jury announced the Audience Award for Best Narrative for “Lumpia With A Vengeance”.

“Our Audience Award for Best Narrative Feature went to ‘Lumpia With A Vengeance’ which is definitely a fan favorite this year in Hawaii,” announced Beckie Stocchetti, HIFF Executive Director. “We’re very excited for the filmmakers.” 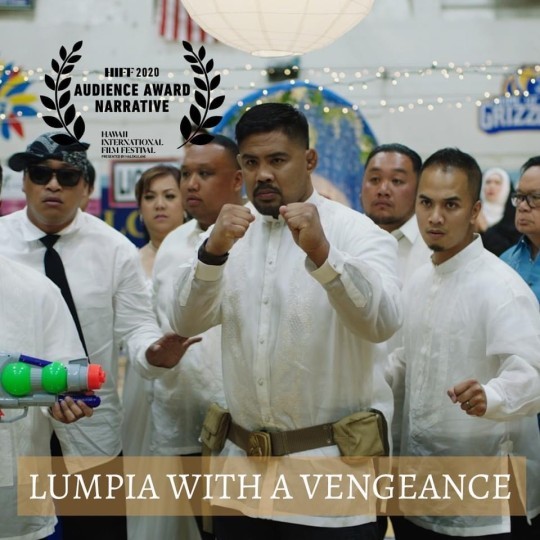 The Lumpia site excitedly shared the news about the big win for the film that is “a community film developed, funded, and starring the community. It’s a Filipino American film but it’s also a fun comic book movie for the masses. And it makes use of the one iconic food that defines our community – LUMPIA!”

“I screamed my head off,” confessed Patricio Ginelsa, the film’s director, producer and writer. “And I think that’s when it hit me: That all the hard work we had put in was validated in that announcement knowing that it came from all types of people who truly enjoyed our movie.”

“The Fil-Am film bested a strong field of international and domestic features, several with high profiles, bigger budgets, and, importantly, distribution deals in place. And while ‘Lumpia With A Vengeance’ is only now being seen for the first time ever, the award speaks literal volumes,” shared the film’s site.

“Lumpi-yeahhh!,” an elated AJ Calomay, the film’s editor and co-producer blared. “I’m so incredibly proud of our incredible cast and crew and of Patricio for his determination to push his vision forward.

“Getting (the audience award) means that people connected with the film emotionally and we’re really proud that within the wild action scenes and flying lumpia, there truly is a human story that not only spoke to people but, they had fun watching it as well.”

WATCH the film trailer and SEND CONGRATULATIONS in the comments below to the team behind the Fil-Am cult classic “Lumpia” sequel for winning the Hawai’i International FilmFest Audience Award!