Modern Filipino restaurant Serai has been named Restaurant of the Year and Best Casual Dining Venue in the Time Out Melbourne Food & Drink Awards.

The Pinoy resto was cited by the magazine for its fire-licked food that is “irreverent, playful and fun while also introducing the non-Filipino Melbournians to a new world of flavour”.

Serai’s menu consists of Filipino staples with a twist such as Lechon, which the restaurant serves with “a pineapple-infused, gently spicy-sweet palapa sauce”, kangaroo kinilaw, Leche flan topped with passionfruit, and many more.

Aside from its reimagined Filipino dishes, the award-winning restaurant located at 7 Racing Club Lane in Melbourne, Australia also boasts an all-natural wine list.

“The Filipino community has really embraced us and been so supportive. My family came in the other night and my mum was so proud. It was awesome. I really do get a bit emotional about it,” Ross Magnaye told Time Out.

The Filipino restaurant was announced among the winners of this year’s Time Out Melbourne Food & Drink Awards on October 14, 2022.

SEND CONGRATULATIONS in the comments below to the team behind Serai, Restaurant of the Year and Best Casual Dining Venue in the Time Out Melbourne Food & Drink Awards! 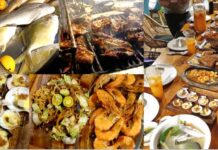