The fame of Ben & Ben spread quickly among South Koreans and other Kpop idols including Young K of boy group Day6 as he mentioned the Pinoy band in his Instagram Live on the same day.

“Ben & Ben, Leaves, Wow! It was amazing. I was really surprised!” said Young K of Day6.

The Filipino band expressed their gratitude to Kpop idols who served as their bridge to stardom in South Korea.

“this week, a lot of great kpop acts discovered our music. here is young k of DAY6 and mark of NCT 127! thank you for appreciating “leaves” 😊 we will listen to your music too!” said Ben & Ben on their FB page.

Even the well-known entertainment agency in Korea, YG Entertainment who also manages the global phenomenon girl group Blackpink, posted about it. 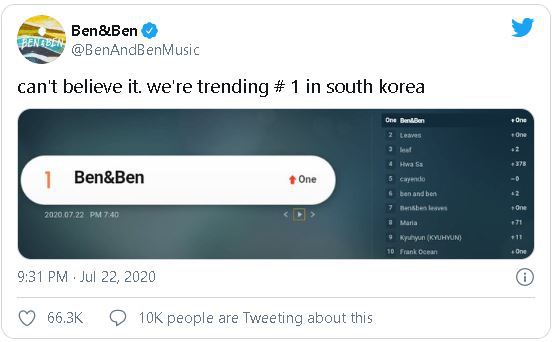 Prior to this event, other famous Korean idols were caught by the folksy music style of Ben & Ben including Cha Eun Woo who sang ‘Kathang Isip’ during his fan meeting in October 2019, and Red Velvet’s Wendy awed at Ben&Ben’s “Beautiful” singing voice.

SEND CHEERS in the comments below to Filipino Indie Band Ben& Ben for soaring on top of South Korea’s online music service, Melon.