After its launch in June coinciding with the national hero’s birth anniversary, the finalists were announced on December 30, 2020, the annual day of tribute to Jose Rizal, to whom TKP-Kilusang Kreatives finds its model of “patriotism through art” from his poetic words “the youth is the hope of the country” that the organization credits for its passion to serving the youth sector.

After receiving submissions from almost 150 Filipino youth, 47 of the finest artworks which carried a message of hope amidst these harsh times were selected from which five judges deliberated for the top 10 that were shortlisted for the final awards.

The final 10 pieces of artwork will be further deliberated upon to select the Top 3 who will be rewarded with cash prizes and recognition. 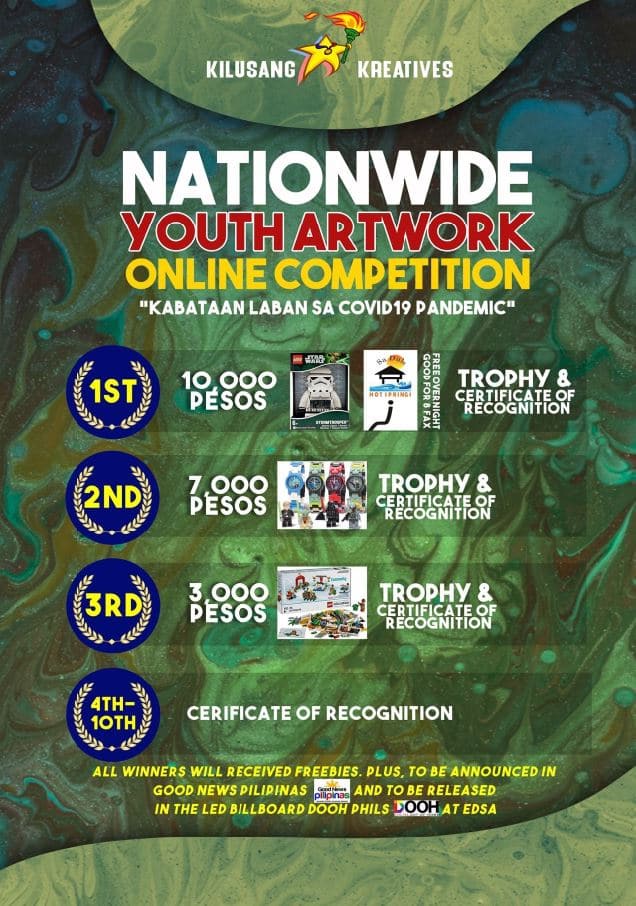 The final selection of winners will include public votes from Kilusang Kreatives’ Facebook audience which will comprise 30% of the judging criteria for the last deliberation.

The organizers said the project seeks to remind the nation that the youth is taking an active part, albeit in their little and creative ways, in support of the eventual recovery of the country from the Pandemic. Through this, TKP-Kilusang Kreatives also sends its sincere support to the frontline medical professionals, government officials, private sectors, and individuals who are tirelessly working for the alleviation of Covid-19 around the infected areas in the Philippines.

Kilusang Kreatives says it hopes that the spark created by the project would create a positive influence in the lives of not only the youth but also for the whole country.

The following are the Top 10 artists:

To join the public voting for the Jose Rizal-inspired youth art contest “Kabataan Laban sa Covid-19 Pandemic”, voters may vote three (“3”) times for their top 3 artworks. To vote, access the pinned post in Kilusang Creatives’ Facebook Page through the link below.

VOTE for your favorite Jose Rizal-inspired youth artwork on this post and SHARE hope in the new year!