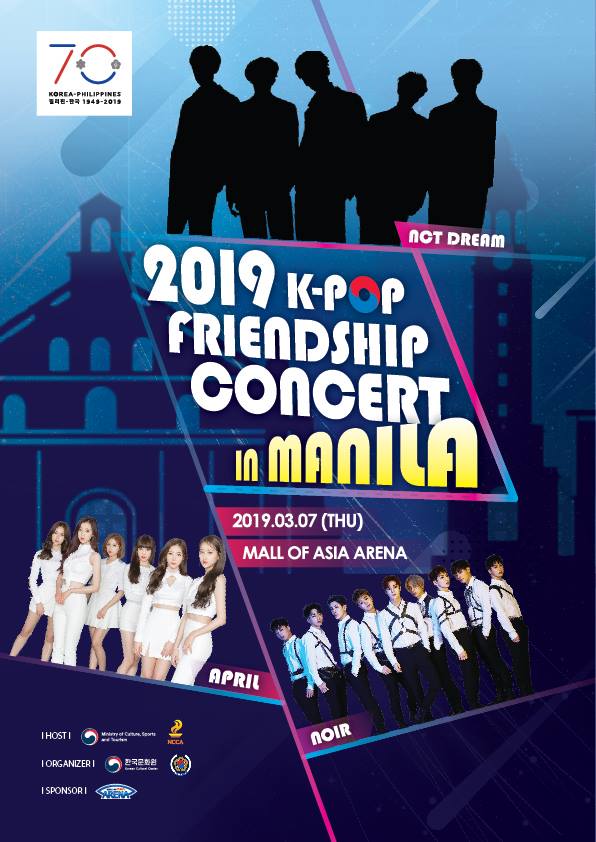 K-Pop groups are set to perform in Manila for a celebration of the 70th anniversary of the establishment of the diplomatic relations between South Korea and the Philippines.

Korean pop groups NCT Dream, NOIR, APRIL are scheduled to go on stage at the Mall of Asia Arena in Pasay on March 7 to honor the special ties between the two countries.

Filipino rock band Silent Sanctuary and the dance trio VinSuriChan of Vince Igno, Dasuri Choi, and Phoi Chan, and a surprise Filipino singer will be the counterpart line up of performers in the concert dubbed “2019 K-POP Friendship Concert in Manila.”

The 70th anniversary of the establishment of the South Korea-Philippines relations will serve “as one of the bridges between the two cultures especially since many Filipinos had been caught up in the extremely addicting Hallyu wave, the concert featuring some of the industry’s hottest artists,” according to the concert’s official site.

Concert tickets are free of charge and have already been distributed to fans in waves of ticket applications but there is still a chance to get hold of the limited seats tickets, announced the organizers-

“If those who got ticket voucher from ticket application did not show up and exchange for his/her ticket by 5:30 PM on the day of event, we will be giving away no-show tickets to those who were waiting at the venue.”

Shoutout to your favorite K-Pop group to let them know how excited you are to be friends, in the comments below!