The 25-year old artist was invited to exhibit his sketches and watercolor artwork alongside hundreds of artists from different parts of the world on April 25 to 28 at the Vancouver Convention Centre.

Quilop is known for his artwork inspired from the iconic buildings of the Philippine capital which he will showcase through his watercolor and ink collection titled “In Between Manila.”

Quilop posted on social media some of his Manila travel spots artwork to be featured in Canada such as the Capitol Theater in Escolta, Bantayog Ng Bayani (Rizal Monument, Luneta Park), the Manila Metropolitan Theater (MET), UP Diliman Oblation Plaza, and the UP Sunken Garden.

The Multimedia Arts and Sciences graduate of Mapua Institute of Technology who works as advertising director, illustrator, and graphic designer, talks about this work on his Travel Sketches website: “Traditional painting has been in the core of my work ever since–it is my escape whenever my daily job as an adman gets stressful.

I’ve been to several places and whenever I find an interesting spot, I make sure to find time to document the place through painting a postcard; as would the French Impressionists–ein plein air–or outdoor painting.”

Quilop shared his fascination with the unique character of Manila telling Spot Ph in an interview, “I want to showcase Manila as our capital. It has a rich heritage. I like the juxtaposition of different eras of buildings. I want to show the beauty and grit of the city at the same time.” 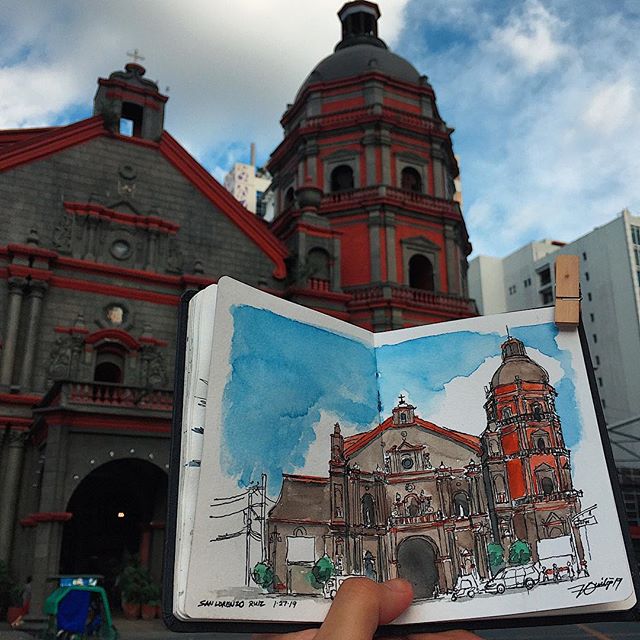 Determined to share his art to the world, Vin Quilop sees the Vancouver art fair as his way to promote the country, its capital, and its people.

“I’m thinking of (Art Vancouver) as an opportunity to give (a foreign audience) a slice of Filipino life through my works,” he said.

In his Instagram post, Vin Quilop announced that he is accepting a limited number of painting commissions to raise funds for his upcoming exhibit in Vancouver. 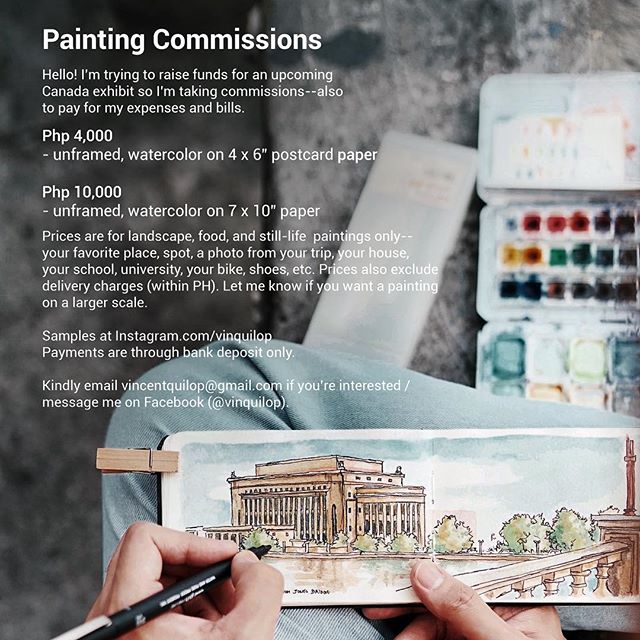 To those who want to help Vin Quilop on his upcoming exhibit in Vancouver, you may reach him via email vincentquilop@gmail.com or through his Facebook accounts here and here.