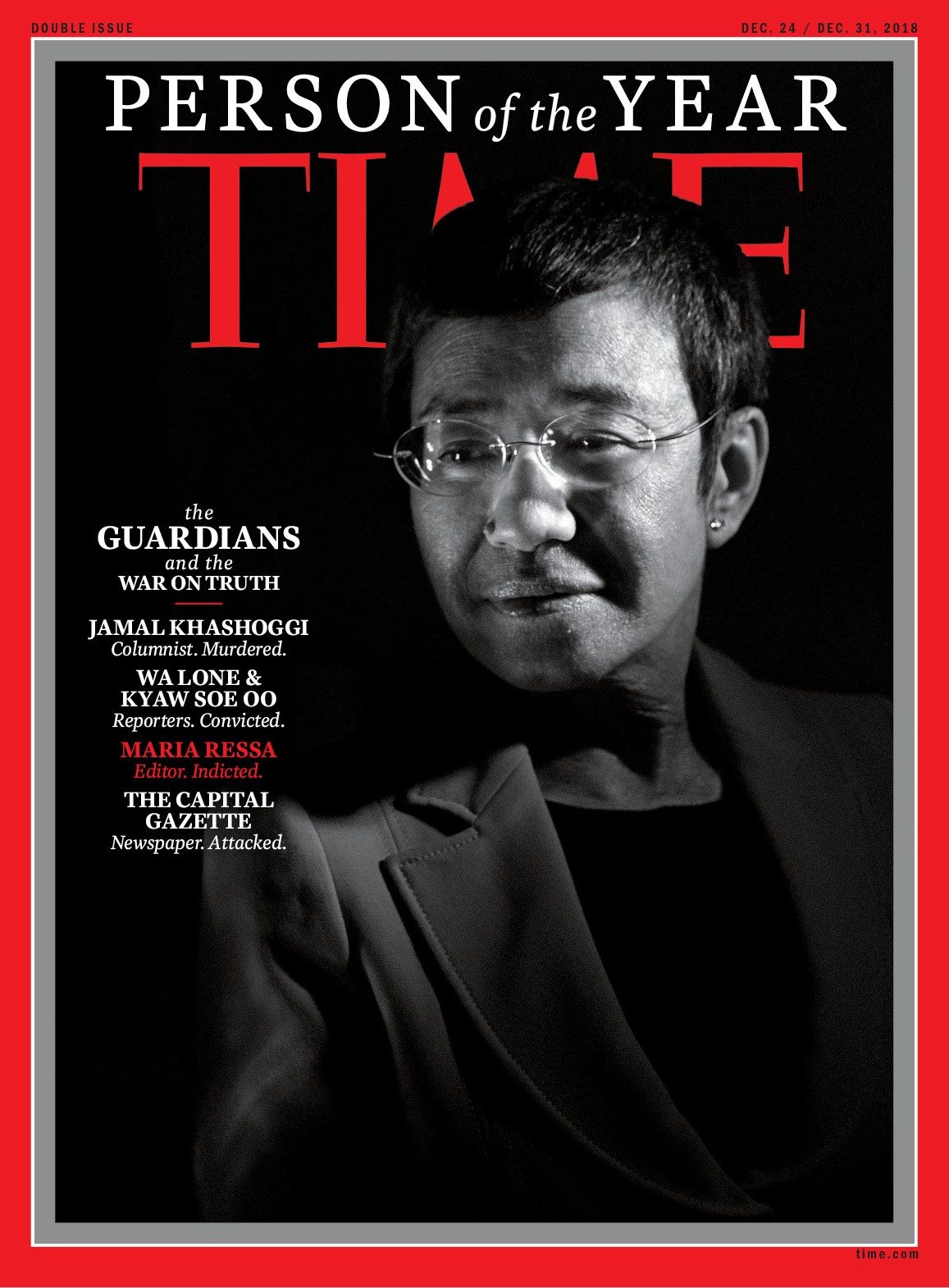 Filipino journalist Maria Ressa has been named as TIME Person of the Year 2018, along with other international journalists who have been named “The Guardians” in the “War on Truth.”

Ressa of Philippine news website Rappler, together with Saudi journalist Jamal Khashoggi of the Washington Post, Reuters Burmese journalists Wa Lone and Kyaw Soe Oo, and the Capital Gazette of Maryland, U.S.A., are featured separately on four distinct covers presenting the prestigious TIME Person of the Year magazine issue for 2018.

The annual issue of the U.S.-based news magazine presents embattled journalists who have unwittingly been made newsmakers themselves for reporting the news.

Ressa, the founder, CEO, and executive editor of the Philippine social news network Rappler, was recognized in early December with the New York-based 2018 Gwen Ifill Press Freedom Award by the Committee to Protect Journalists for remaining steadfast to her principles of journalism despite facing challenges to press freedom.

The Rappler chief was also awarded the Golden Pen of Freedom at the 70th World News Media Congress held in Portugal in June.

In the TIME article “The Guardians and The War On Truth” the 55-year-old Ressa was described as steering Rappler “through a superstorm of the two most formidable forces in the information universe: social media and a populist President with authoritarian inclinations.” As she and her news organization continues to cover critical stories about the Philippines, Ressa was indicted in December in connection with tax fraud allegations that could imprison her for 10 years – “a move widely viewed as an attempted crackdown on Rappler’s reporting.”

In the TIME video presentation of its 2018 Person of the Year, Ressa refers to journalists as the ones who dare to cross boundaries to give people information they need. “We cross these lines. We sound the alert.

When people don’t know what is real and what is fake the voice with the loudest megaphone gains more power.”

TIME writes about why Ressa and journalists are the 2018 Person of the Year:

Whom do you trust to tell the story? (These journalists are) tempering it (stories) with troubling facts and trusting the public to think for itself.

Such independence is no small thing. It marks the distinction between tyranny and democracy. And in a world where budding authoritarians have advanced by blurring the difference, there was a clarity in the spectacle of a tyrant’s fury visited upon a man armed only with a pen. Because the strongmen of the world only look strong. All despots live in fear of their people. To see genuine strength, look to the spaces where individuals dare to describe what’s going on in front of them.

This ought to be a time when democracy leaps forward, an informed citizenry being essential to self-government. Instead, it’s in retreat. Three decades after the Cold War defeat of a blunt and crude autocracy, a more clever brand takes nourishment from the murk that surrounds us. The old-school despot embraced censorship. The modern despot, finding that more difficult, foments mistrust of credible fact, thrives on the confusion loosed by social media and fashions the illusion of legitimacy from supplicants.”

Citing the Philippines’ experience, TIME notes free access to social media has made people think Facebook is the Internet “which means most people are unable to access anything beyond it, as other websites—including news sites—require more expensive data use.”

“If your mass base gets Facebook for free and thinks it’s the Internet, they don’t realize A) it’s filtered and B) You can’t search. Without search, there’s no way to check information,” says the Rappler editor.

“I think the biggest problem that we face right now is that the beacon of democracy, the one that stood up for both human rights and press freedom—the United States—now is very confused,” says Ressa, the Rappler editor.

Maria Ressa joins an elite list of featured TIME Person of the Year, widely held as a prize or award since it began in 1927 with features on personalities such as Charles Lindbergh, Mahatma Gandhi, Martin Luther King Jr., presidents, industry captains, and others who greatly influenced the events of the year.

Read the full report on why Maria Ressa and Journalists are the TIME Person of the Year 2018.