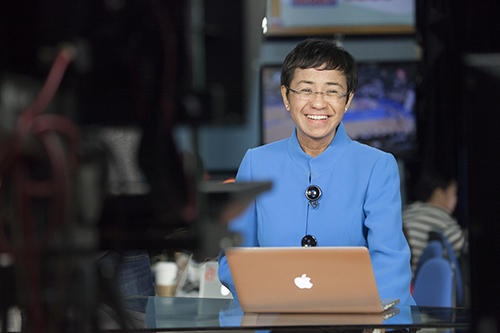 Ressa, the founder, CEO, and executive editor of the Philippine social news network Rappler, was recognized by the CPJ – an independent, nonprofit organization that promotes press freedom worldwide and defender of the right of journalists to report the news without fear of reprisal – for remaining steadfast to her principles of journalism despite facing challenges to press freedom.

Ressa received the annual award to honor veteran journalist Gwen Ifill as “an individual who has shown extraordinary and sustained achievement in the cause of press freedom.”

In the CPJ citation Ressa was acknowledged for having been a journalist in Asia for more than 30 years, most of them as CNN’s bureau chief in Manila, then Jakarta. During that time, she served as the network’s lead investigative reporter focusing on terrorism in Southeast Asia.

In 2005, she took the helm of ABS-CBN News and Current Affairs, and for six years managed more than 1,000 journalists for the largest multi-platform news operation in the Philippines. Her work aimed to redefine journalism by combining traditional broadcast, new media, and mobile phone technology for social change. In 1987, Ressa helped found the independent production company Probe.

She has taught courses in politics and media for her alma mater, Princeton University, as well as in broadcasting at the University of the Philippines.

Her 2012 book, “From Bin Laden to Facebook,” is part of her work as author-in-residence and senior fellow at the International Centre for Political Violence & Terrorism Research in Singapore. In 2003, she wrote “Seeds of Terror: An Eyewitness Account of Al-Qaeda’s Newest Center of Operations in Southeast Asia,” which documented the growth of Jemaah Islamiyah and its links to Al-Qaeda.

Ressa has led Rappler since its establishment in 2012, uncovering causes and consequences of the drug war, the spread of “fake news,” the culture of impunity, among other critical stories.

Ressa is a multi awarded journalist who received 2018 Golden Pen of Freedom Award from World Association of Newspapers and News Publishers (WAN-IFRA), the 2018 Knight International Journalism Award, the 2018 Free Media Pioneer Award from the International Press Institute, and the National Democratic Institute’s Democracy Award in 2017.

Ressa’s acceptance speech for the 2018 Gwen Ifill Press Freedom Award outlined 6 Lessons and Appeals for Action at times when journalism is challenged:

Ressa thanked the CPJ and her colleagues around the world saying the award comes at a time when Rappler needs the attention and support amidst the challenges of social media technology platforms and government actions.