The weekend program which is now running on its second season aims to introduce the colorful and rich Filipino heritage and culture to children worldwide through the 5 to 10-minute long stories written by Filipino authors.

The Pinay beauty queens joined the list of international Filipino artists such as rapper-songwriter Apl.de.ap, book author, and philanthropist Jaime Kailani, critically-acclaimed animator Bobby Rubio, and Broadway theater actress Ali Ewoldt to do the narration of stories in Filipino and English languages.

Miss Universe 2018 Catriona Gray, who advocates for children’s welfare and education, will start the Bahay Book Club season with the story “The Sea Creature and the Legend of the Pearl” that tells the story on how a mother inspires the sea creature named Hiyas to create pearls.

Miss Universe 2015 Pia Wurtzbach, who has been raising funds for frontliner PPEs, will read the classical Filipino tale of generous nymph “Maria Makiling” and the two men whom she taught a lesson after disobeying her.

Black Eyed Peas’ rapper-songwriter Apl.de.ap, who has donated to Philippine hospitals, will voice the quest of Lam-ang, together with his magical rooster and dog, in finding his missing father in the story “The Epic of Ibalon”.

Writer-director and animator Bobby Rubio, who recently used his Filipino Float characters to salute medical frontliners, will narrate the story “The Centaur and the Elves”, which is about a boy who gets lost and meets a centaur and an elf while finding his way back home.

Broadway musical theater actress Ali Ewoldt, who played Christine in The Phantom of the Opera, will present the touching story “Lola’s Hands” where a young girl remembers her grandmother while preparing her heirloom family recipe.

Mama Earth organization founder and children’s book author Jaime Kailani will narrate the “Legend of the Rainbow”, a story about the king and his effort to make his daughter smile through the colorful rainbow. 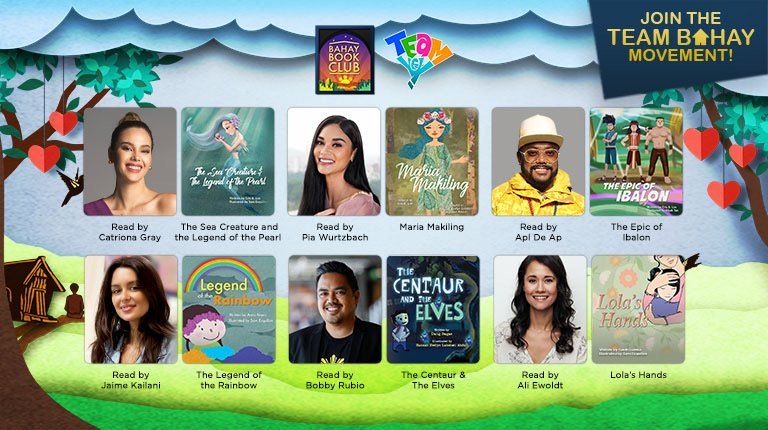 Bahay Book Club will be aired via TFC on cable and satellite on the following schedule:

Bahay Book Club can also be accessed through TFC IPTV, and on TFC Online exclusive for Premium subscribers.

SEND CHEERS in the comments below to our global Filipinos for lending their voices to Filipino children’s stories!