University of Santos Tomas (UST) student film “Golden” made the finals of the Lift-Off Global Network Sessions (LOGNS) of the United Kingdom and Hollywood.

The Filipino short film made the Top 5 finalists in its Programme at the Lift-Off Film Festival after the online festival screened the UST student production on Vimeo on Demand in August 2020.

LOGNS traditionally screens films at the Pinewood Studios in the United Kingdom and at the Raleigh Studios in Hollywood, Los Angeles but switched to virtual this year amid the ongoing COVID-19 pandemic.

“Golden” tells the tale of the female protagonist who takes to gambling to sustain her studies after losing her scholarship and finds empowerment and friendship despite the corruption and dishonest systems.

The film previously scored 3 awards for Best Cinematography, Best Sound, and Best Poster from its 10 nominations at the Sine Reel 2019, an annual film making competition that features short films created by the senior members of the University of Santo Tomas (UST) Communication Arts Students’ Association.

More Filipino filmmakers are enjoying wins and nominations from international competitions despite the coronavirus pandemic.

Lingua Franca, starring Filipina trans woman Isabel Sandoval, nabbed the “Best Narrative Feature” award at this year’s Bentonville Film Festival. The film made history on its world premiere at the 2019 Venice International Film Festival as the first film directed and starred by a trans woman of color to be showcased in the festival.

Philippine film “Tutop (Covered Candor)” meanwhile earned several recognitions for its team in festivals held during the lockdown in the United States, Italy, and Istanbul.

WATCH the video clip here and SEND CONGRATULATIONS to the team of University of Santos Tomas students who filmed ‘Golden for making the finals of Lift-Off Global Network Sessions. 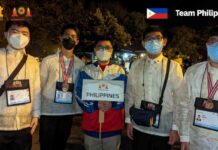