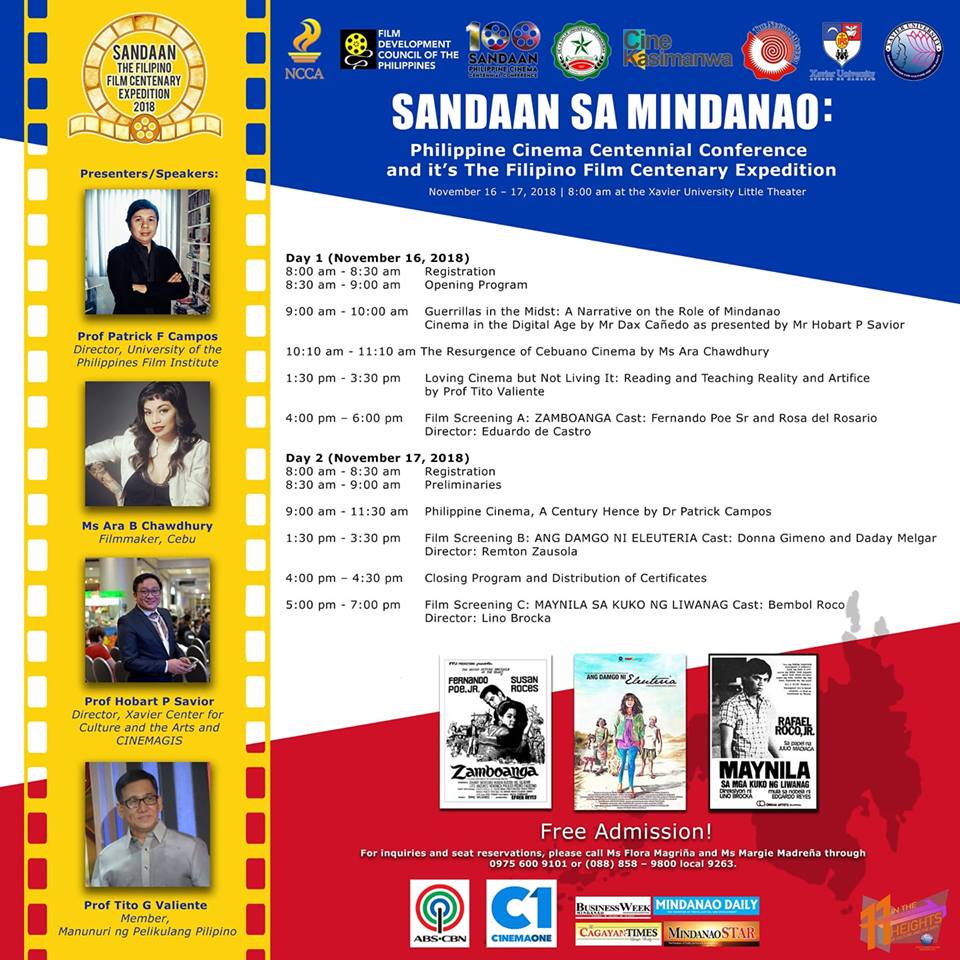 Sandaan: The Filipino Film Centenary Expedition (TFFCE) will have its Mindanao leg held on November 16 to 17, 2018 at Xavier University – Ateneo de Cagayan Little Theater, featuring the cinema landscape of Mindanao.

Dubbed “Sandaan sa Mindanao” the conference will showcase experts who will talk on how Mindanao figured in the centenary history of Philippine cinema.

One of the talks will revolve on the role of Mindanao Cinema in the digital age. Dax Canedo of Davao, one of the founders of Guerilla Filmmaking Workshop and Festival authored this paper. Hobart Savior, project director of Sandaan sa Mindanao will serve as its presentor.

Another highlight of the Mindanao expedition is the Cebuano Cinema and its resurgence. Leading the talk would be Ara Chawdhury, a filmmaker, poet, journalist from Cebu.

Programs and plans for the different regions in the archipelago will also be unveiled by the Film Development Council of the Philippines through FDCP chair, Liza Dino-Seguerra.

Tito Valiente, film educator and critic, meanwhile, will discuss Loving Cinema but Not Living It; Reading and Teaching Reality and Artifice.

Filmmakers, students, teachers and enthusiasts who will celebrate Sandaan sa Mindanao will learn about the Philippine Cinema, A Century Hence from Dr. Patrick Campos, director of the University of the Philippines Film Institute (UPFI).

Aside from the must-see talks, there will be film screenings of award-winning movies such as “Zamboanga” a movie set on the shores of Sulu where the sea-faring tribe that is ruled by Datu Tanbuon lives. Starring Fernando Poe and Rosa Del Rosario, and directed by Eduardo de Castro, the film was released in 1937.

Another is Lino Brocka’s “Maynila sa mga Kuko ng Liwanag,” a movie included in the list of the greatest films in the world by The Criterion Collection. The National Artist for Cinema directed the movie while Mike de Leon served as its producer with Prof. Clodualdo del Mundo Jr. as its writer. Bembol Roco and Tommy Abuel starred in the said film.

Ang Damgo ni Eleuteria which made it to the 2010 Cinema One Originals will also be screened. The story about mail-to-order brides was directed by Remton Siega Zuasola and written by Maria Victoria Beltran.

De La Salle University- Dasmariñas (DLSUD), through the Communication and Journalism Department (CJD) is the head organizer for this activity which is spearheaded by the National Commission for Culture and the Arts (NCCA). Collaborating with DLSUD-CJD are Xavier University – Ateneo de Cagayan, CineKasimanwa, and The Negros Museum.

After the Mindanao leg, Sandaan TFFCE will then journey to Luzon on Nov. 22 to 23 in De La Salle University – Dasmarinas then to the Visayas on Nov. 28 at the Negros Museum, Dec. 7 at the Department of Education – Schools Division of Capiz and Dec. 8 at the University of the Philippines Visayas (Iloilo).