BREAKING NEWS: Cavite writer-director Arvin Kadiboy Belarmino has just given the Philippines the honor of having its 1st Best Film award from the Interfilm Berlin-Brandenburg Film Festival in Germany, an Academy Award (Oscars) Qualifying Festival.

Tarang was given the highest honors among 69 competing entries selected from almost 6,000 submissions from all over the world.

“The most striking quality of this film is its candid, blunt and sincere storytelling in which all film departments are equally important. From the first scene on, it captures the audience: inviting us into the character’s realities instead of judging them. You seem to forget you are watching a short film and think you are watching a documentary – the reality of the film makes you feel like a fly on the wall, but there is no wall to hide behind,” went the International Jury citation for Arvin Belarmino’s short film.

Tarang tells the story of Rodel, a sidecar driver who works alongside his wife Aya, a prostitute, in a place where they can hopefully earn enough to survive. They will one day face an unexpected incident in the streets that will test their faith and lives.

The Caviteno filmmaker alumnus of De La Salle University Dasmarinas describes the 17-minute short Tarang as a film that “depicts poverty from an unexplored perspective. Its story reaches out to the viewers’ emotional core and leads to empathy. Ultimately, it is one that implies – and hopefully prompts – social change.” 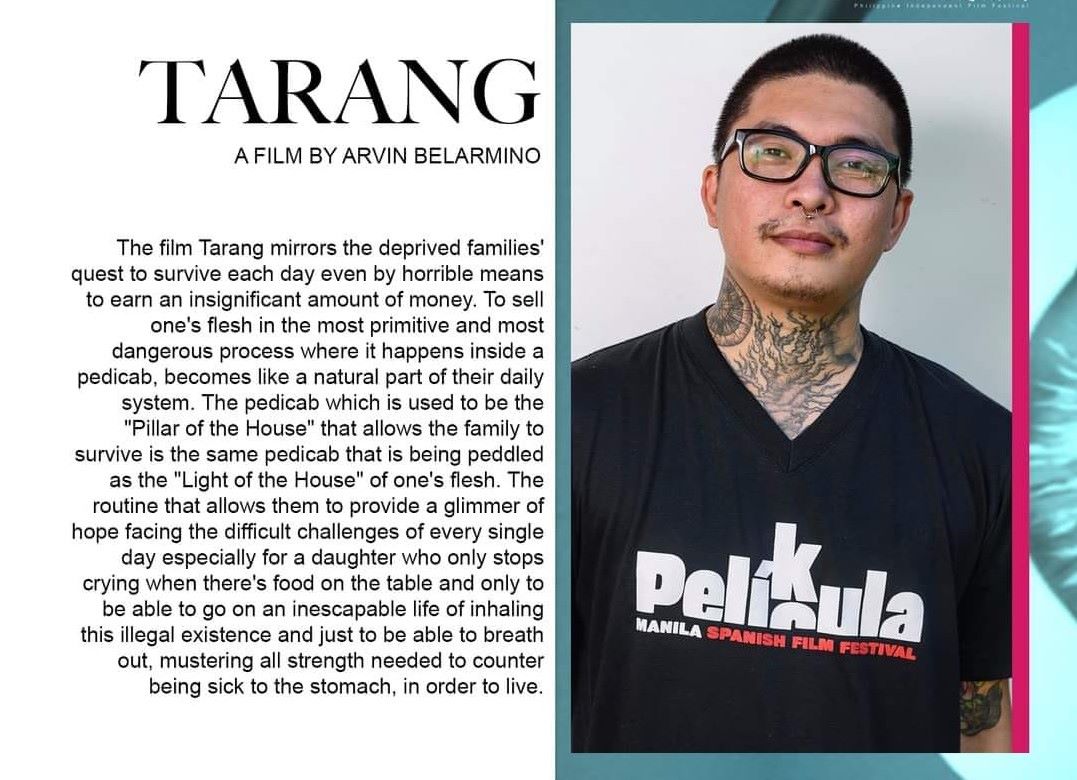 Belarmino was emotionally charged as he shared the milestone news with GoodNewsPilipinas.com, saying he still could not believe he won the prestigious award. He said he had considered the year 2020 as a dismal year “dahil sa pagkamatay ng lola ko at ng mga kaibigan kong namatay dahil sa pandemyang ito (because of my grandmother’s death and my friends who have died during the pandemic)”.

Aside from his Tarang film winning 6000 euro, Belarmino says he is looking forward to more opportunities to showcase Filipino filmmaking as a result of the Best Film win in Berlin.

Interfilm Berlin has yet to announce if Arvin Belarmino’s Tarang would be sent to the 2021 Oscars.

Belarmino’s “The Gathering”, his first foray into mobile phone filmmaking, successfully made the Top 20 cut in the Mobile Filmmaker’s International Fest held in Moscow, Russia.

The Caviteno director’s “Nakaw” also made its way to screenings at the Landshut Short Film Festival (Landshuter Kurzfilmfestival) in Germany.

SEND CONGRATULATIONS in the comments below to Cavite filmmaker Arvin Belarmino for giving the Philippines its 1st Best Film in Interfilm Berlin!