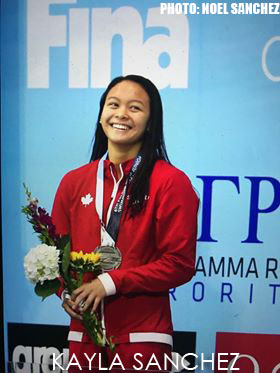 Kayla Sanchez won the North York Aquatic Cup in Toronto held in early November, clocking in at 23.94 to become the fastest under-18 female in the 50-m freestyle division.

The 17-year-old Sanchez has broken the existing world junior record time of 24.00 held by Menghui Zhu of China.

The Canadian swimming star, whose father Noel hails from Mabalacat and mother Susana from Baguio, started swimming competitively at a young age after her family migrated to Canada. Sanchez has caught the world’s attention winning medal after medal with her Canadian swim team.

Sanchez’ new 50 freestyle junior record puts her on 5th rank in the world.

Writer Alex Castro interviewed Sanchez’ parents and revealed their hopes for the Fil-Canadian swim star to swim for the Philippines. “But at the moment, an official in the Philippines National Team put it this way, ‘whatever flag she represent, for me she’s always be a Filipino by heart.’”