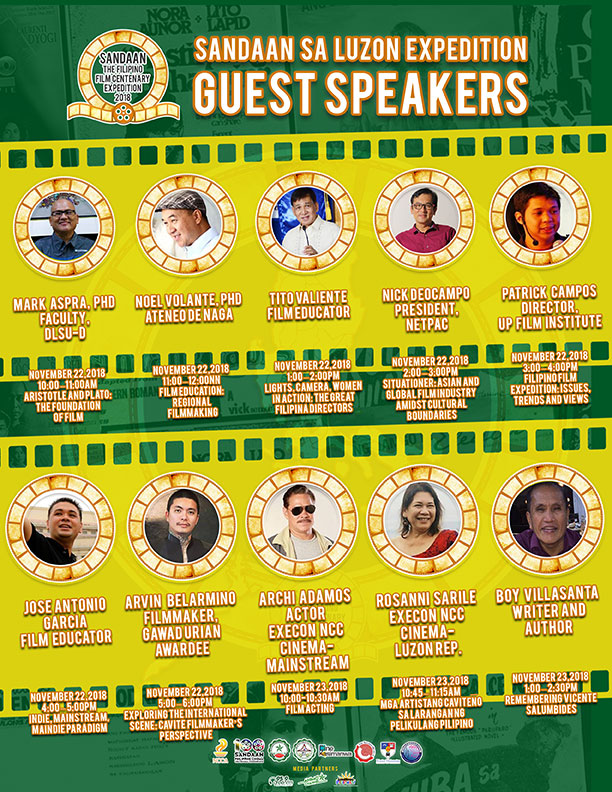 Nick Deocampo and other notable film historians are all set to join the Sandaan Sa Luzon Leg of Sandaan: The Filipino Film Centenary Expedition (TFFCE) to celebrate 100 years of Philippine Cinema this November 22-23 at the De La Salle University – Dasmarinas in Cavite.

Aside from the talks, acclaimed films from Cinema Rehiyon Reloaded will be screened at the Tanghalan ng Julian Felipe in De La Salle University – Dasmarinas.

The student short film, “Alpas” will also be screened. The film was produced by Communication and Journalism Department students of De La Salle University – Dasmarinas. Alpas dominated the 19th Gawad Tala awards of DLSUD-CJD in 2017. It is a film about a middle child who experiences “episodes” every time a problem occurs. Every episode brought him closer to the truth about his past.

An exhibit and film screenings are simultaneously being held at the Learning Commons of Aklatang Emilio Aguinaldo (AEA) of De La Salle University – Dasmarinas. The project is in collaboration with AEA-IRC on the occasion of the 28th Library & Information Services Month with the theme, “Ang Kulturang may Malasakit, sa Silid-aklatan ay Makakamit.”

Sandaan Sa Luzon is organized by DLSU-D for the National Cinema Committee of the National Commission on Culture and the Arts with its project director Communication and Journalism Department chairman Artin Umali. The next TFFCE leg will be at the Visayas organized by The Negros Museum and CineKasimanwa.