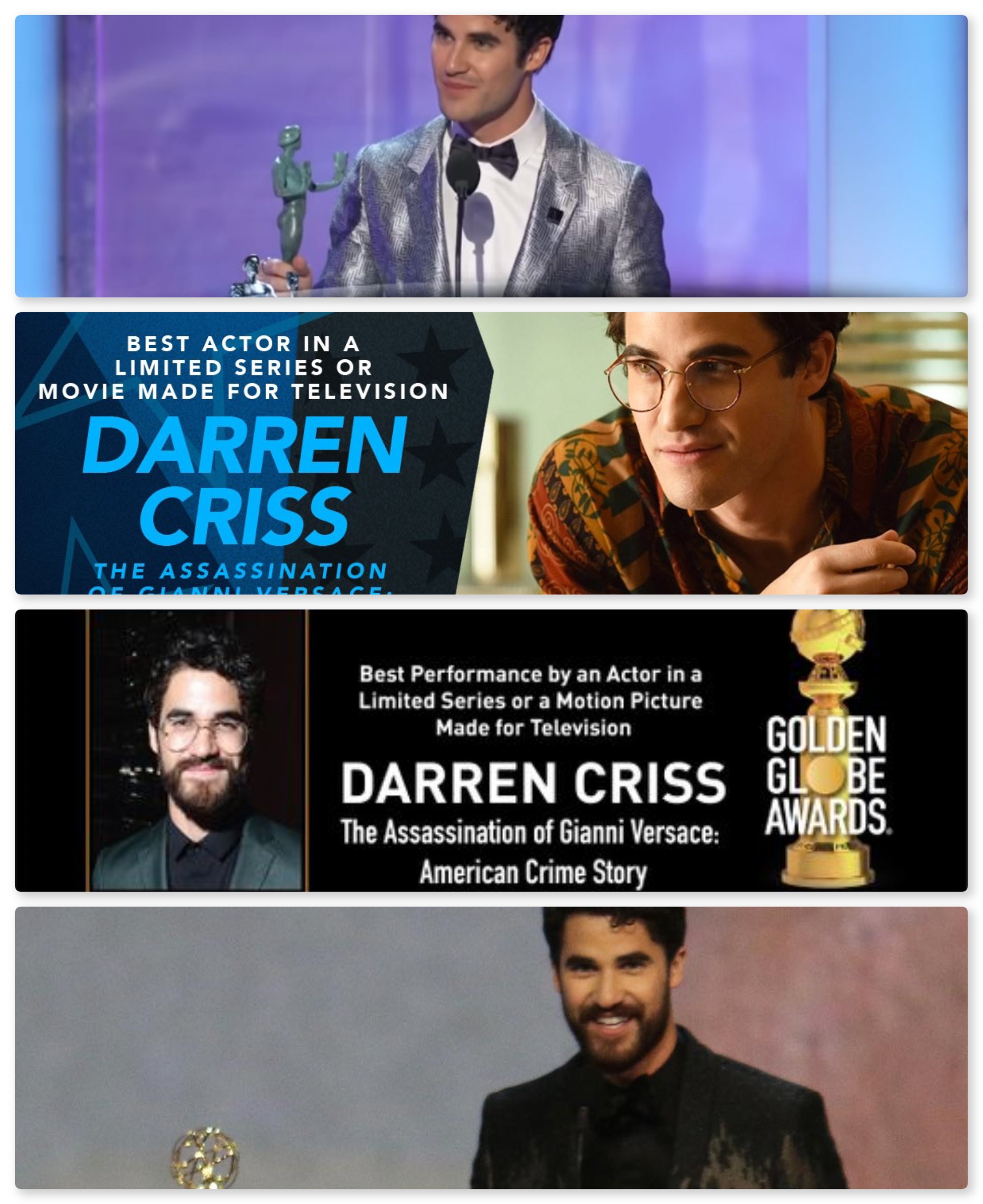 Darren Criss received the SAG Award for “Male Actor in a Television mode or Limited Series” for his role as Andrew Cunanan in FX Networks’ 9-episode series, ACS: Versace.

In his 4 acceptance speeches, Criss always acknowledged his parental heritage and his advocacy for more cultural representation in Hollywood.

Darren Criss picked up his first Emmy in September 2018, marking the first time a Filipino-American received the major award. Criss readily acknowledged his family’s influence in his acceptance speech upon receiving the Emmy for “Outstanding Lead Actor In A Limited Series Or Movie.”

In January 2019, the Fil-Am actor picked up the Golden Globe Award from the Hollywood Foreign Press Association for “Best Performance by an Actor in a Limited Series or a Motion Picture Made for Television.” Criss said “this was a marvelous year for representation in Hollywood” – referring to the advocacy for more diverse cultures on screen and in filmmaking.

Criss dedicated his 2nd Best Actor win to his Cebuana mother, Cerina, and described himself as “the son of a firecracker Filipino woman from Cebu that dreamed of coming to this country.”

The Broadcast Film Critics Association and Broadcast Television Journalists Association’s 24th Annual Critics Choice Awards for 2019 gave the actor recognition to Criss as the actor humbly accepted the award saying he may not receive one again in the future.

Three’s a charm for Darren Criss as his 3rd nomination from the 25th Annual Screen Actors Guild Awards finally earned him his first win from the only televised awards shows to exclusively honor performers.

The multi-awarded Fil-Am Hollywood actor received the trophy for “Best Actor in a Limited Series or Movie Made for Television” – one of the 13 SAG Awards for acting in film and television that focuses on individual and cast performances of the entire ensemble of a drama series and comedy series.

In this acceptance speech, Darren Criss said, unlike the killer who used masks to destroy he is using his actor masks with the goal to “create positive change.”

Criss addressed the families and kin of the victims of Andrew Cunanan, whose portrayal won him his 4-in-a-row best actor trophies, saying their goal was not to make a spectacle of their tragedy but to “create a positive dialogue about social issues and bring to justice things that were in the shadows.”