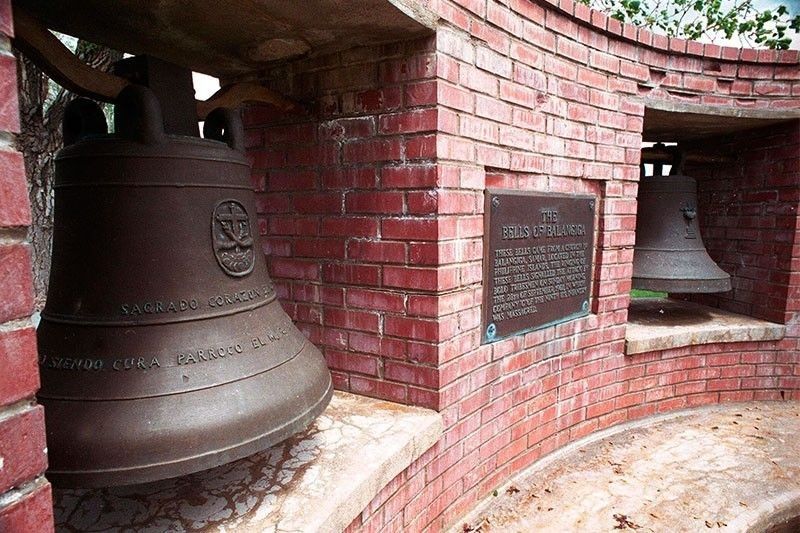 Balangiga, Eastern Samar is prepared for the return of the Bells of Balangiga when the United States government finally returns the Philippine property after a century.

The Catholic church of Balangiga town has already constructed a place to display the historic bells even before the U.S. government started crating the bells for return to the Philippines.

Balangiga town parish priest Serafin Tybaco, Jr. said the church has placed a new concrete platform in front of the building to publicly display the bells that were taken by the American army during the Philippine-US war.

The church built the platform at the Bells Garden, which was the main burial site of 20 Balangiga residents who died during the September 28, 1901 attack when the townspeople used the Balangiga Bells to warn the people.

“In our meetings, there was a consensus that bells will be displayed on this site. We built the structure even before we received the good news because we are positive that those bells would be returned,” Fr. Tybaco said.

Church and local government officials finalize activities for the welcome ceremonies of the Balangiga Bells.

The Philippine News Agency reports that following the news of the bells’ return, residents in the town “have been excited and grateful to those who helped in realizing their dream of having the bells back in their hometown.”

For almost four decades, parish priests who were assigned in Balangiga have filed petitions for the return of the three bells.

The regional office of the Department of Tourism (DOT) is anticipating the return of the Balangiga Bells to boost the tourism arrival of Eastern Samar and Balangiga town, according to DOT Regional Director Karina Rosa Tiopes.

“There are lesson that we can learn from this historical event which we can apply in our present time like patriotism and that is an important obligation for us Filipinos. We need to be patriotic to show our love for our country,” Tiopes said.

The Balangiga Bells were taken on October 18, 1901 by the 11th Infantry Regiment as war trophies.

Two bells were brought to Francis E. Warren Air Force Base while the third and smaller bell is at the US military base in South Korea. Officials hope to receive the bells before Christmas Day after the November 14 ceremonies in Wyoming signaled the journey of the bells back to the Philippines.

The Balangiga Encounter happened on September 28, 1901, when town residents, led by Valeriano Abanador, initiated an attack against US soldiers. The villagers killed 54 American soldiers using bolos. It was the biggest defeat of the foreign troop during the Philippine-American war.

Around 2,500 Filipinos were killed by the US retaliatory attack. The Americans took the Balangiga Bells after they turned the town into a “howling wilderness”.

The Balangiga Bells will return to the Balangiga town about 98 kilometers east of Tacloban City. It is a fourth class town in Eastern Samar, with a population of 14,085.