Good News Pilipinas Live is back as an internet radio show via Pinoy Seoul Radio featuring good news stories to make Filipinos around the world proud of themselves as a nation even at these times of COVID-19 global pandemic.

Before Pinoy Seoul Radio, Good News Pilipinas Live was part of DLSU-D 95.9 Green FM shows for 6 years since 2014 when Balibay served as its Station Manager.

Good News Pilipinas talked to the radio show’s producer-headwriter Aleeyah Peñafiel about the radio show where she first worked as a radio production student of Angie Quadra Balibay. She now continues in the same assignment for the new internet radio show.

Peñafiel shared about the 2019 edition of Good News Pilipinas Live on Green FM being with a different set of student anchors, with a live studio guest, and being a Facebook Live show as well.

“As a producer, I had to guide my anchors about the script. We weren’t just live on radio, but we were also live on Facebook,” recalls Peñafiel.

With the move of Good News Pilipinas Live to internet radio, the show brings back its original anchor, Angie Quadra Balibay.

Balibay said GoodNewsPilipinas.com had been considering going on podcast to have an audio platform to go with our Good News Pilipinas TV. But that the lockdown put the project proposal on hold.

“Then as we kept looking for good stories to tell about Filipinos around the world, we found Nash Ang’s Pinoy Seoul Radio. It was running a social distancing campaign online for OFWs and we featured that. We then started exploring a tie-up to bring back Good News Pilipinas Live – this time as an Internet Radio show,” Balibay explains.

“It was just amazing that the broadcast was set up between two countries – South Korea where Nash Ang is currently based and the Philippines, where I am based. The lockdown had given both our organizations more time to explore collaborations. And Good News Pilipinas Live @PinoySeoul Radio Online was born,” recalls Balibay. 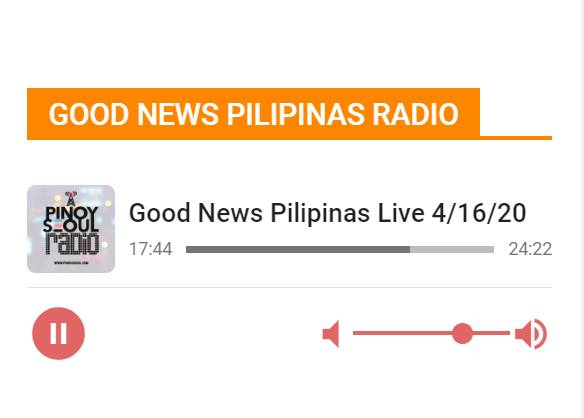 Balibay shares that the technicals for the Internet Radio show were tested during the soft airings.

“It took a bit of time to get used to since this is a one-person live radio operation, unlike when we were on terrestrial radio with technical directors and a sound crew who checked levels and set up.

“This internet radio brought me back to the basics of my passion for radio. I am on my own while on air, leveling the mic and music background, and even stingers. Good thing that Nash and the Good News Pilipinas Team are tuned in to give me feedback about the audio levels, the delivery,” shares Balibay.

“Good News Pilipinas on Green FM had longer air time.. with live guests, live reports. But we were on air only once a week for one hour. With Pinoy Seoul Radio we are on air every day and can be accessed everywhere since the technologies used are more convenient,” Peñafiel adds.

Good News Pilipinas Live continues to deliver good stories about the Philippines and Filipinos around the world through a media collaboration with Nash Ang’s Pinoy Seoul Radio. The material for the show comes from the published articles by the writers of GoodNewsPilipinas.com that have been rewritten as broadcast news script.

“They’ve been working as much as they could, even if the lockdown had limited their newsgathering options. So we have fresh stories to tell every day,” says Balibay.

The show’s “Good News Angel” credits the writers and student interns for the consistent airing of Good News Pilipinas Live @PinoySeoul Radio Online since day 1 of its return.

More collaborations have expanded the content from the soft airings into the current 20-30 minutes program with the addition of features from Good News Pilipinas TV with Positivitrix Trixie Esguerra, Liter of Light’s Illac Diaz with the #GoodLight #MessageofHope campaign for COVID-19 response, and Level Up Quarantunes of Noel Ferrer.

“With the #GoodLight #MessageofHope campaign we encourage people to donate to COVID-19 relief efforts We started featuring the solar messages during the live radio show at 6 pm and showing the video on Good News Pilipinas TV with Positivitrix on FB Live at 8pm, and then on our social media.

“We have weekend editions, too, with tips to stay positive and list features shared on the show, and the Level Up Quarantunes song dedication to inspire Filipinos with the healing power of music,” adds Balibay. 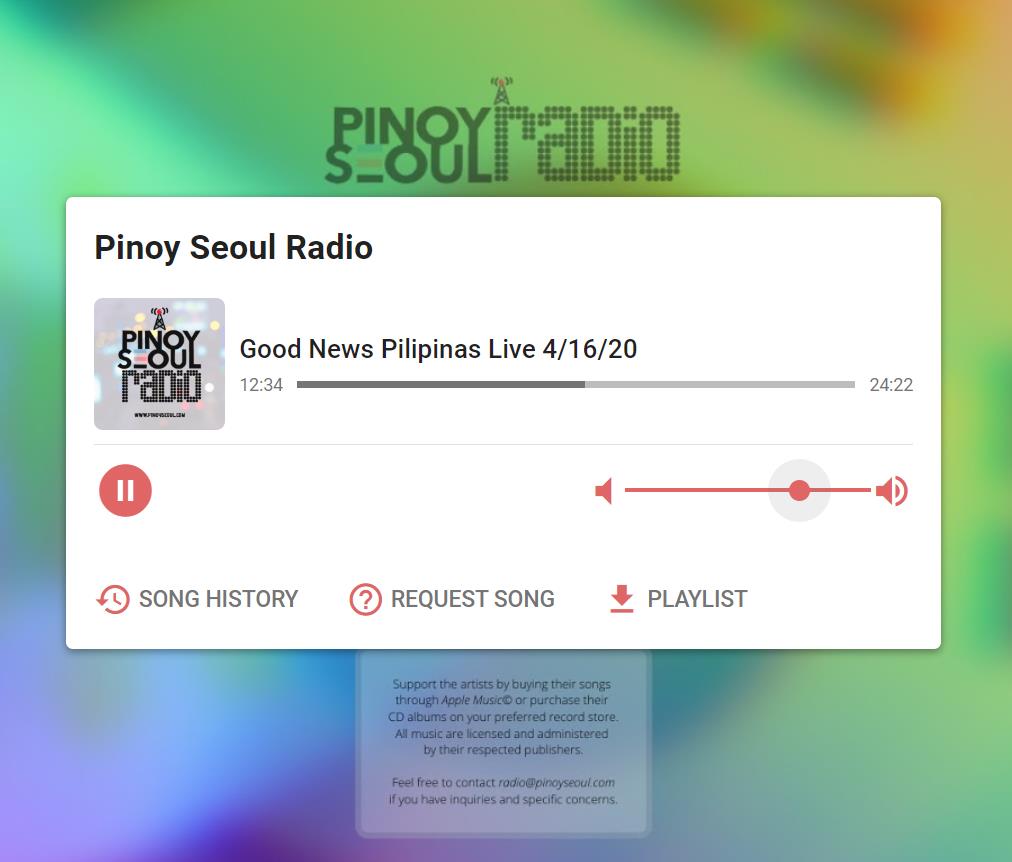 Pinoy Seoul Radio is a 24-hour online radio, currently broadcasting the best of the Philippines’ and Korea’s music with programs such as “OFW Homesick Playlist” and “OPM Classics for Overseas Filipinos” curated specifically to Filipino diaspora across the world. Pinoy Seoul Radio also gives tips to OFWs on Social Distancing to prevent the spread of COVID-19.

The first-ever Korea Pinoy International Film Festival (KPIFF) held in Seoul in 2019 was the first collaboration between Nash Ang of Pinoy Artists in Korea and GoodNewsPilipinas.com as a media partner.

Filipino social entrepreneur Nash Ang brought the Philippines to South Korea through the online Pinoy Store – an e-commerce platform that functions much like a Pinoy neighborhood sari-sari store.

Balibay was also the featured speaker at the Philippine Computer Society in 2019.

CHECK OUT Good News Pilipinas Live @PinoySeoul Radio Online every 6 pm, 12 mn, 6 am, and 12 nn on GoodNewsPilipinas.com for more good news stories that make the Filipino proud about the Philippines.