Award-winning international actor John Arcilla, who has played many iconic roles including the Philippine revolution’s Heneral Antonio Luna, showed his support to the Salute to a Clean Flag (STACF) movement launched to promote respect for the Philippine flag.

Arcilla, who portrayed the lead character in the critically-acclaimed film Heneral Luna, joined the flag ceremony which commemorated the signing of the Memorandum of Agreement between private companies and government agencies who will work on displaying an abundance of clean flags in the country.

Aside from attending the flag ceremony, John Arcilla also led the Panunumpa sa Watawat ng Pilipinas, and presented the manifesto of the Salute to a Clean Flag movement. Good News Pilipinas learned that Arcilla had also committed to leading the movement in future events.

A campaign started by Monique Pronove of Pronove Tai International Property Consultants, the Salute to a Clean Flag Movement has brought together both the private sector and the public sector such as the National Historical Commission of the Philippines and the Philippine National Police as an effort to revive Patriotism.

The event was attended by Arcilla, Pronove Tai, the Philippine National Police, and National Historical Commission of the Philippines.  Ayala Foundation Inc., which is also involved in the #MagingMagiting flag campaign was invited to witness the MOA to signify its support to the STACF campaign.

It was also attended by Teresita Herbosa, former Securities and Exchange Commission (SEC) chairperson and descendant of Jose Rizal, who has signed on as STACF Ambassador, as well as niece of Delfina Rizal Herbosa de Natividad – one of the three women who sewed the flag in 1898. 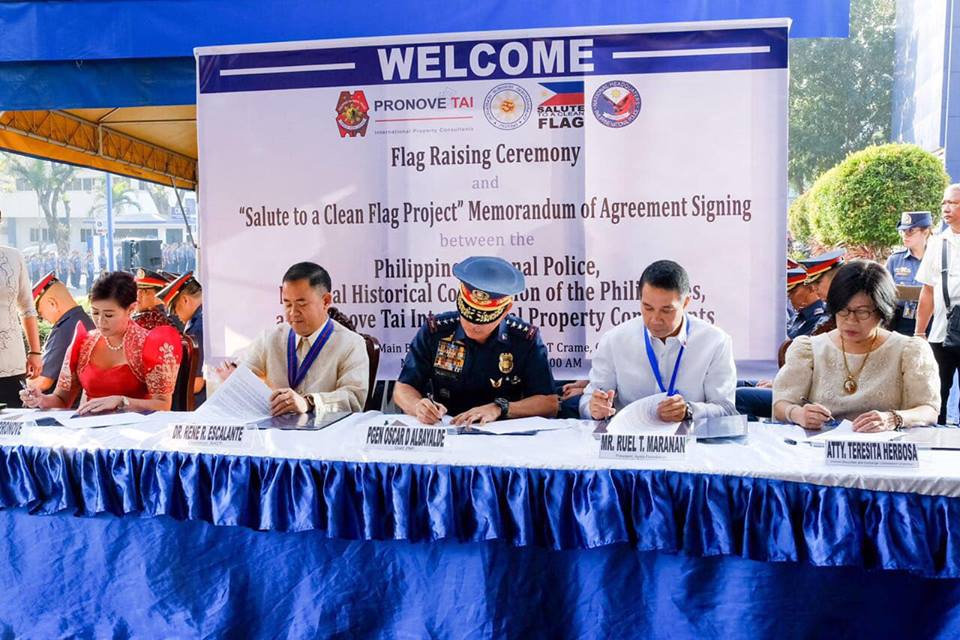 For John, who has long been a proponent of patriotism as displayed in the roles he has chosen, believes in the goal of the Salute to a Clean Flag Movement, “Today more than ever do we need to be reminded of what our heroes before us has done in order to give us the freedom that we have today. By proudly displaying our flag we not only give honor to them but we are also reminded to love and care for our country and do everything to we can to protect it and promote it.”

The Salute to a Clean Flag Project aims to promote renewed respect and love for the Philippine flag through raising awareness in both the public and private sector in order revitalize patriotism in the country. Actor John Arcilla added, “This advocacy shows what we can do as a country if we learn to unite as one. This ceremony brought together both the public and private sector and reminded us of the significance of our flag.”

John then encourages the public to display their clean Filipino flags proudly as a way to support this endeavor.