The Cavite province-native GM Wesley So won the thrilling three-way rapid playoff tiebreak with a final score of 2.0/2 against GM Fabiano Caruana and GM Sam Sevian at the St. Louis Chess Club-hosted over-the-board tournament which ended on October 19, 2021.

The three GMs forced the tiebreak matches after ending with the same score of 6.5/11 at the end of 11 rounds of the round-robin classical segment of the US Chess Championship with Wesley So scoring two wins and 9 draws.

Going into the playoffs, So revealed in the tournament post-11th game interview that he did not expect to win the 2021 US Chess Championship because he was not playing his best chess as he was tired from the previous grueling tours.

So recently won the 3-month-long Grand Chess Tour and was the leading challenger to World No. 1 Magnus Carlsen of Norway during the 12-month long Meltwater Champions Chess Tour which ended in October just before the US Chess Championship tour started.

In his interview after being declared the 2021 US Chess Champion, the ever-humble Wesley So said, “I thought the tournament was pretty much over by yesterday, Fabiano almost won three games in a row.

“It just gave me a new breath of life that the tournament was not yet over, that I might still have some chances. I just wanted to play fast today and make some good moves.

“Fabi plays for a win with both colors, soon I found myself in a very difficult position. Probably, in the endgame, he missed a win somewhere. I was playing with no pressure: I did not expect this playoff, so I was just playing chess. If chances come, good. If I lose, that’s fine.”

History and breaks proved they were on Wesley So’s side on the tour championship decision day as the Filipino American won his back-to-back US Chess Championship.

American chess legend Rex Sinquefield noted in the awards ceremony how Wesley So’s achievement is only the third time a Grandmaster was able to achieve the feat since the Men’s division of the US Chess Championship was established. The last time there was a back-to-back Men’s champion was in 2013-14 when Gata Kamsky, the Soviet-born American won the tournament. Russia-born Ukrainian champion Lev Alburt won his in 1984-85.

Steady So vs speeding Caruana

So was first matched against come-from-behind leader Caruana in a Round 1 game played by the two favorites to win the title.

Playing black pieces, the Filipino American managed to keep his position playable despite making a mistake. On the other hand, the streaking Caruana who was coming from back-to-back-to-back wins and overcame losses in the regular run to grab the joint top spot stumbled at the end and lost time, and the game to steady-playing So in 49 moves.

However, Caruana again bounced back in his Round 2 match against Sevian to stay in contention for the title in the event So loses his next game and forces another round of matches.

Calm So vs complicated Sevian

In Round 3, So was matched against Sevian and only needed the game to be drawn for the FilAm to be declared tournament champion.

Playing with white pieces this time around, Wesley So played in his usual calm style while Sevian kept complicating the board with offbeat plays to stay in the game.

So was able to exploit Black’s weaknesses, taking the advantage, and finally winning the playoff against Sevian in 33 moves.

So actually got off to a good start in his title defense when the tourney began on October 5 with 12 of the strongest chess players in America vying for the $194,000 total prize money, qualification into the World Championship cycle, and the title of 2021 U.S. Champion.

Wesley So stayed in the lead throughout the tourney and went into the 11th round in the top 3 contenders for the US Chess Championship title. 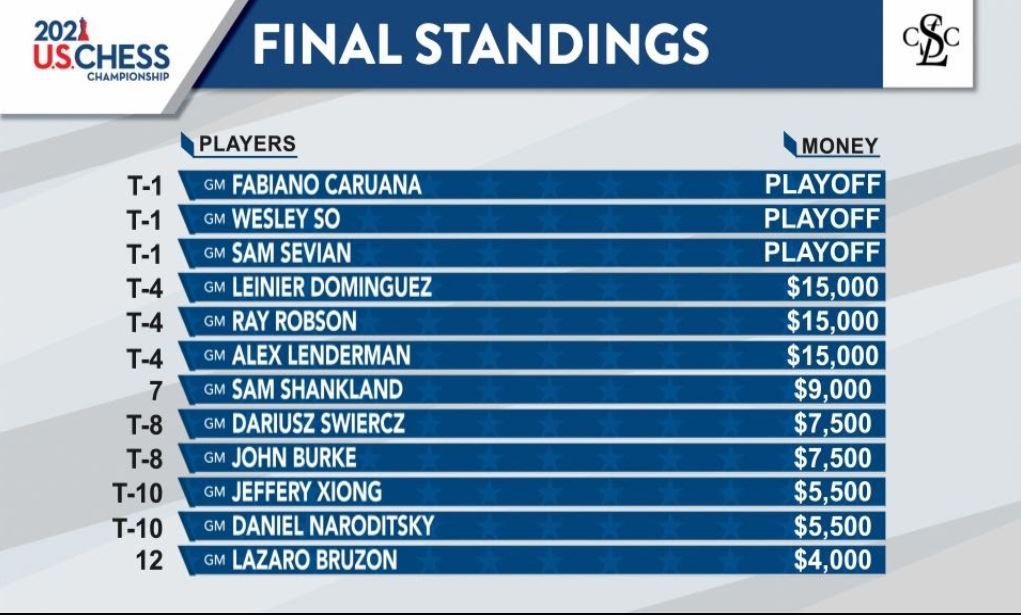 Grandmaster Wesley So who turned 28 years old just before the tournament brought several honors to the Philippines until he decided to accept the invitation to hone his talent and join the American chess league to play together with the world’s best chess players.

Winning the 2021 US Chess Championship gave So the $50,000 1st place prize pot and his third national title.

Wesley So previously reclaimed the US Chess Championship in 2020 after winning it for the first time in 2017 – both victories also secured in undefeated runs.

WATCH Wesley So successfully defend his title at the US Chess Championships on the St. Louis Chess Club YouTube channel and SEND CONGRATULATIONS in the comments below!