Filipino social innovator Illac Diaz has been declared an Association of Southeast Asian Nations (ASEAN) champion for his Liter of Light initiative which brings sustainable electricity to the energy-poor communities around the globe.

Diaz was featured in the “Great Changes Come from Small Groups of People”, episode 3 the ASEAN Champions podcast series that features stand-out individuals who have made big contributions to the Asian community.

The Edison Awardee talked about the inspiring backstory for the Liter of Light grassroots movement in the third episode of the ASEAN Champions series, the first podcast in Southeast Asia that talks about inspiring people with great causes.

The Filipino sociopreneur has won a string of awards for his humanitarian work which is lauded globally for the unconventional and innovative solutions to the world’s common problems. Diaz was named one of the Global Leaders by the World Economic Forum in 2008 and one of Ten Outstanding Young Persons of the World by the Jaycees International, among others.

Beginnings of Liter of Light 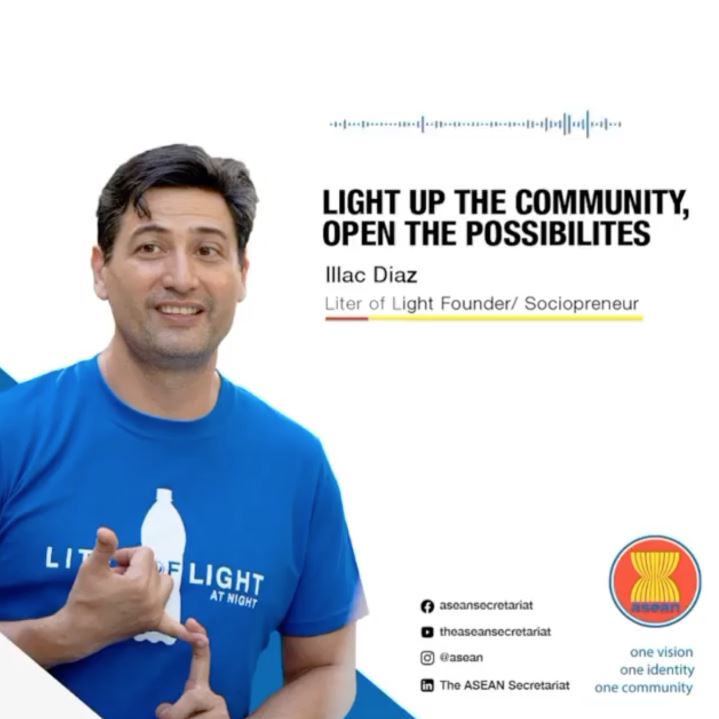 The journey of Liter of Light began when Diaz found himself in the midst of a disaster brought by Typhoon Haiyan, known in the Philippines as Super Typhoon Yolanda which made landfall as a category five storm in 2013.

The social innovator recounted his harrowing experience during the powerful tropical cyclone’s onslaught on Filipino villages and communities.

According to Diaz, the village next to his house was swept away by the typhoon and countless lives were left devastated in the wake of the storm. Diaz initially thought to devise a way to improve climate resilience in the Philippines and began his outreach work with alternative housing based on disaster resilience for the underprivileged.

Diaz and his group were depending on donations to restore houses and provide basic utilities to the people such as water and electricity. From there, the idea struck him to start the grassroots initiative Liter of Light from scratch. The foundation started out as an immediate response to the lack of localized systems for emergency lighting and alternative housing amid the natural disaster.

“We’re basically the uncommon solution to a common problem with our emergency lighting kit,” he said. Combining his previous experiences and research, Diaz built hundreds of solar lights out of readily available items aided by women cooperatives who had lost their jobs.

The founder and leader of the Liter of Light not only provided homes with environmentally friendly lighting but also found a way to empower village women and youth through equipping them with the technical skills to be more independent and self-sufficient in the face of disaster.

“Liter of Light built a system but it’s the people themselves who light up their own world and built a resilient community,” Diaz continued. From there, the innovator had a dream to light up every corner of the world, one solar-powered lamp at a time.

Today, the Liter of Light Foundation has illuminated over 1.5 million households around the globe, including remote villages his team reached in the 100-day Voyage of Light Around the World on the Peace Boat.

Illac Diaz is also a staunch Filipino pride advocate who believes all houses deserve light and warmth. He hopes to inspire more Filipinos to pioneer more innovations like his to help make positive changes in Philippine communities and the world.

“But it has a greater purpose, Liter of Light also wants to show the world that Filipinos are strong with local innovation and participation,” Diaz added.

Illac Diaz ended the podcast with a message to youth and marginalized communities everywhere whom he says are often underestimated despite their power to make good things happen.

Liter of Light has also started the Light it Forward campaign in the Philippines to raise awareness for 20 million Filipinos still living in the dark while honoring frontliners in the battle against COVID 19. The campaign is conducted in partnership with GoodNewsPilipinas.com and the Rotary Club of Makati Business District.

With the help of celebrity endorsers and personalities, the campaign gained traction and is now one of the most trending challenges in social media. Light it Forward was recently named the recipient of the Asia Pacific Social Innovation and Partnership Award (APSIPA) Award.

WATCH the podcast here and SEND WELL WISHES in the comments below to Liter of Light’s Illac Diaz for being hailed an ASEAN Champion.

SEND CONGRATULATIONS in the comments below to Liter of Light’s Illac Diaz for being hailed an ASEAN Champion!