Pia Wurztbach, who won the Miss Universe crown in Las Vegas in a heart-stopping and dramatic moment, unveiled her wax replica in Manila on March 29.

On Instagram Pia posted her first selfie with her “Twin Queen” during the March 28 press reveal.

First selfie! 💙 This couldn’t be more perfect for #ThrowbackThursday! Feels like I’m reliving my crowning moment back in 2015! It’s surreal to see my wax figure in the flesh…and I’m really really honored to be the first Filipino to be part of Madame Tussauds! Dedicating this to my family, loved ones, and to all Filipinos! Maraming salamat sa suporta all these years

Both Pia and her “twin” wax figure were stunning in Michael Cinco’s identical blue gowns when she turned the crown over to Iris Mittenaere of France in the Miss Universe coronation held in Manila on January of 2017.

Filipino designer Michael Cinco was tapped to replicate the blue gown to be worn by Pia’s wax figure. Cinco described it as an “impalpable dream come true.”

“Dressing up her wax figure and to represent our country are already an honor and a great experience in my career,” Michael Cinco said. 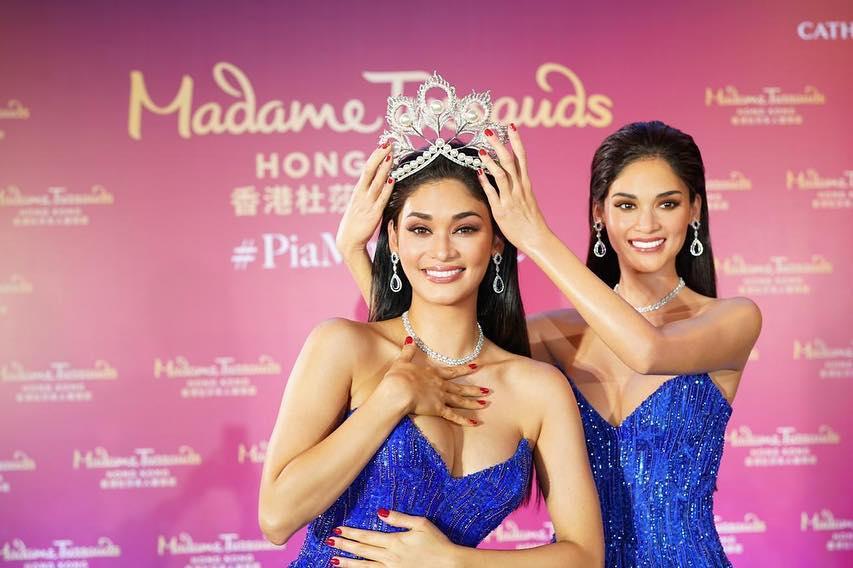 Madame Tussaud’s media release said that the Filipina beauty has surpassed her title saying, “As the UN ambassador of the AIDS Program, Pia evokes more through his own platform. Many people’s attention to AIDS has become an example of confidence and strength.”

The wax figure was shown to the public at the SM Mega Fashion Hall.

Pia Wurtzbach’s wax replica will be transferred to Hong Kong this April where it will be permanently displayed alongside world icons such as Asian superstars Jackie Chan, Bruce Lee, Michelle Yeoh, and Hollywood’s famous stars like Brad Pitt, Angelina Jolie, Lady Gaga, and more.

Send your cheers in the comments below to congratulate Pia Wurtzbach for this new milestone!