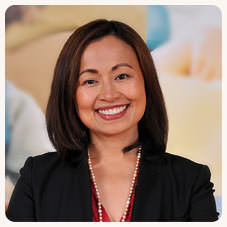 Marcelo’s Care.com has been a publicly traded company listed in the New York Stock Exchange since 2014.

Marcelo grew up in an entrepreneurial household, raised in the Philippines by business savvy parents from Candelaria, Quezon. She studied in Quezon province, graduated high school in Brent International School in Baguio, then she went to the U.S to study economics and international relations.

She founded the company Care.com in 2006 when she realized how difficult it was to find a caregiver for her own children and parents. She was working for a tech company then. After experiencing firsthand the challenge of looking for care through the Yellow Pages, she knew that using technology to serve both the families looking for caregivers and the care workers finding meaningful employment can make a positive impact.

“It is only fitting that, as a Filipina, I founded Care.com. The Philippines has a very nurturing culture and is one of the biggest exporters of care in the world. In the U.S. we’re best known for being the world’s largest marketplace for care,” Marcelo stated in an interview with Loida Nicolas Lewis for The FilAm magazine.

Her innovative company continues to address global care challenges and she works with non-profit organizations as she advocates to unlock women’s economic potential worldwide.

WATCH: Viral video imagines a world without Filipinos and the Philippines