The Philippines has been ranked Top 7 among the 50 Best Countries for Snorkeling Around the World in a new study of oceans and seas that offer the best underwater experience.

The Philippine seas joined the best-of-list of travel destinations for snorkeling topped by Australia (1st), the Maldives (2nd), and the United States (3rd), based on analyses conducted by luggage storage company, Bounce.

The Snorkeling Rating evaluated the world’s oceans and seas based on the following factors:

The Philippines garnered a snorkeling rating of 6.69 points out of 10 for its vast 25,060 square kilometers of coral reef area, diversity of 3,339 fish species to see, and 35 snorkeling tours offered across the archipelago’s 7,640 islands.

However, despite the diversity of marine life in the country’s oceans, 91 fish species were found to be threatened. Sea temperature spread which causes coral bleaching is at 3.03.

The country rated highest on the percentage of global plastic waste emission with 36.38% compared to the majority of the listed countries with percentages mostly at zero and the next highest at 12.

The Snorkeling Seas research results released in July 2022 revealed that the major threat faced by the world is the plastic waste filling up the oceans and damaging marine life, with data showing that the volume of plastic in surface oceans steadily increased by more than five percent each year.

The Philippines’ best-known snorkeling and diving spots are in Batangas, Cebu, Palawan, and many more.

The country’s coral reefs are the richest part of the Coral Triangle located in the western Pacific Ocean and have been praised by National Geographic as among the world’s best while calling attention to threats of climate change and destructive fishing practices.

The Philippines was earlier hailed the Best Dive Destination in the Asia Pacific and bagged the title of the World’s Leading Dive Destination for the third time in a row at the prestigious World Travel Awards (WTA).

TELL US in the comments below about your travel experience or wish-list to see the Philippines, one of the Top 10 best countries for snorkeling around the world! 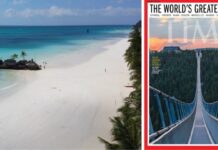