Filipino young legislator Sarah Jane Ibañez Elago has been named as a recipient of the prestigious One Young World (OYW) Politician of the Year Award in Germany.

The KABATAAN party-list representative and University of the Philippines Diliman alumna made history as the first Filipino to be given the highly coveted award.

Elago is among the five outstanding youth political leaders with the age of 18 to 35, who are receiving recognition for their leadership qualities.

The One Young World announced on July 15, 2020, the five winners from the 15 shortlisted young politicians from around the globe who are using their positions to create change for young people in their communities and countries.

The panel of respected judges from OYW noted Elago’s accomplishments that have made a positive impact on young people including the promising bills she authored such as:

The young political leader is now in her second term as KABATAAN representative since she was first elected in 2016.

She has authored and co-authored 426 bills, outweighing the output of some of the elder lawmakers in the Philippines.

While the trust ratings of the country’s politicians stoop low, Elago’s outstanding performance as the youngest female legislator of the Philippine Congress is gaining favor from the people.

“This @KabataanPL youth representation is truly humbled to be recognized as @oneyoungworld Politician of the Year 2020! We are obliged to persevere in bringing in politics of hope, action and change because our future is at stake,” said Sarah Elago in her Facebook post. 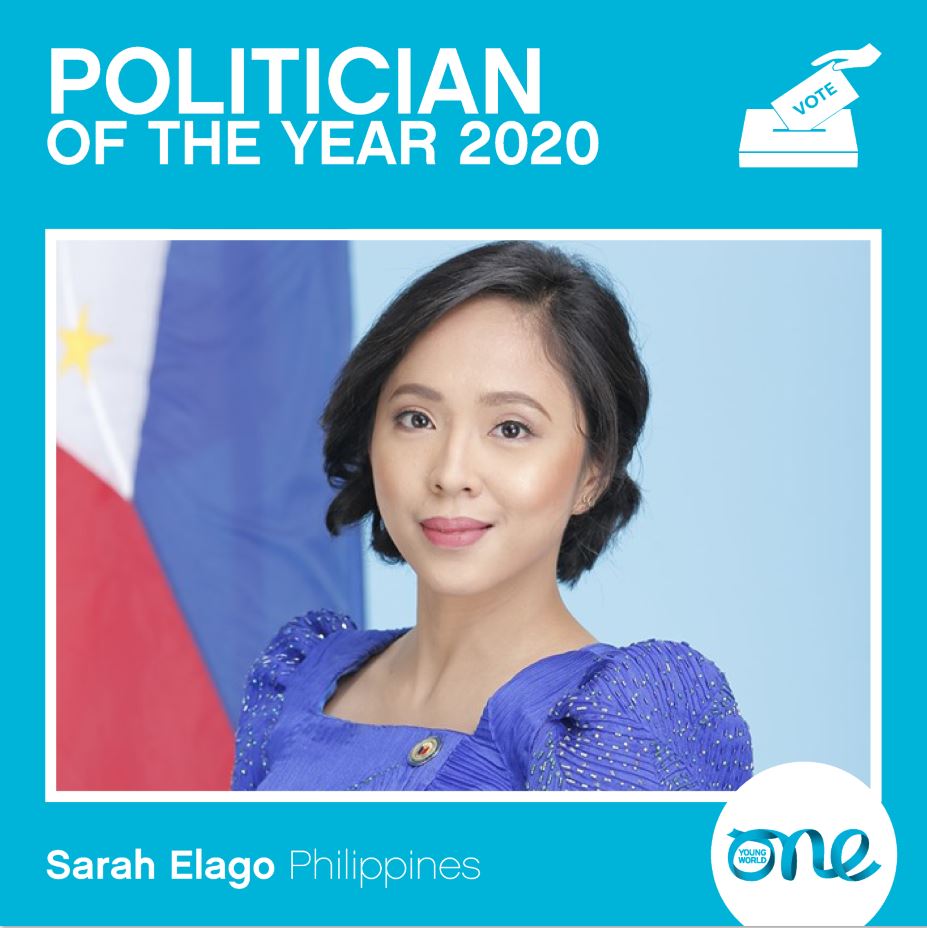 The 30-year old lawmaker is known for breaking off from the mainstream of traditional politics and is an active member of Makabayan bloc, a coalition of twelve party-list organizations known for its critical stances on national issues.

Despite being known as the poorest member of the House of Representatives, with a net worth of ₱85,400 based on her 2018 Statement of Assets, Liabilities, and Net Worth, the young politician is passionately seeking the good of the Filipino people, advocating democracy and fighting corruption in the country.

With her significant contributions, Elago has been chosen as one of the winners of the OYW award along with other awardees:

The winners will be presented with the Award at the One Young World 2021 Summit taking place in Munich, Germany on April 23 to 26, 2021.

More outstanding Pinoys are hailed all around the globe for their significant contributions in various fields including another UP Alumna Catharine Aquino-Fournier who is developing Covid-19 testing technology in Switzerland.

Filipino-Americans Jessica Caloza and Susana Reyes were reappointed to their posts as commissioners in public boards for 5-year terms in Los Angeles.

SEND CHEERS in the comments below to young legislator and UP alumna Sarah Elago for making history as the first Filipino to win the One Young Word Politician award.