The World No. 1 e-Kata player completed his Bachelor of Science Major in Advertising Management degree he enrolled in 2008, the same year he was drafted to the national team.

The multi-medaled Filipino athlete recalled how he needed many leaves of absence for training and to compete three times for the Southeast Asian Games and twice for the Asian Games.

“With this, I had to put up with some professors and office staff calling me ‘kuya,’ and vice versa (those semi-awkward moments where I address them back as ‘ma’am’ or ‘sir’),” De Los Santos mused after being awarded his academic degree on September 25.

James De Los Santos had earlier received his first Gawad Lasalyano award for winning the 2nd ISKF World Shoto Cup in 2017 and his second university recognition in 2021 after achieving the number 1 spot in the virtual kata world rankings.

The 32-year-old new graduate also expressed his gratitude to the university which supported his athletic career.

“Despite the ups and downs, I have no regrets. I’m very grateful that my university was very supportive of my decision in regards to my athletic career. I was still able to cross the finish line,” wrote James De Los Santos.

SEND CONGRATULATIONS in the comments below to World e-Karate Filipino champion James De Los Santos for finally graduating after 14 years! 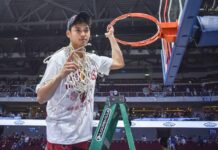