Filipino mixed martial arts (MMA) champions and sports journalists are headlining the Global Martial Arts Summit and Awards to be held from November 7-9 in Singapore.

A total of nine former and current Filipino MMAs, a Filipino MMA coach, a training gym, and sports journalists have been nominated for the awards that recognizes the achievements of personalities and events that are remembered well for making a mark in MMA history.

A Filipino also topbills the ONE Championship event – Heart of the Lion, the biggest MMA fight event of the year at the end of the summit.

The Filipino nominees for the Global Martial Arts Summit and Awards as released by ONE Championship’s Philippine broadcast partner ABSCBN are:

1. Eduard Folayang, Martial Arts Hero of the Year, Walkout of the Year

Eduard “The Landslide” Folayang, acknowledged the face of Philippine MMA, is nominated for the major title of Martial Arts Hero of the Year.

The Cordillera fighter’s signature walkout with the song “Hero” is also nominated as Walkout of the Year.

Folayang made MMA history grabbing the 2016 ONE Lightweight belt in one of the sport’s biggest upsets, knocking out Japan’s elite MMA Shinya Aoki.

He has since won championship bouts by unanimous decisions, two of them in 2018. Folayang, a member of Team Lakay, is a favored contender for championship titles and will be on the ONE Championship stage on November 23.

Kevin “The Silencer” Belingon is nominated for two awards – the male athlete and breakthrough athlete.

Belingon is a native of the Igorot tribe in the Cordilleras and will be headlining the Global Martial Arts Summit’s big fight – the ONE: Heart of a Lion on November 9 in Singapore where the Team Lakay fighter will vie for the unified title of Bantamweight champion.

Joshua “The Passion” Pacio is nominated for the male athlete and for the submission of the year awards after displaying his signature “Passion lock” in defeating his Thai opponent.

Paco is the current ONE Strawweight World Champion after defeating his Japanese opponent in September 2018.

Pacio, a member of Team Lakay, had an undefeated amateur record before turning professional.

4. Team Lakay, Gym of the Year

Team Lakay, the Cordillera-based training group, is nominated as the gym of the year.

The training gym of Folayang, Belington, Pacio, and many other Filipino MMA champs like Geje “Gravity” Esutaquio, Team Lakay is also known as the group that keeps helping the Cordilleran people more recently the victims of disasters.

Coach Mark Sangiao of Team Lakay is credited with leading the training and being the man behind the Filipino MMA champs.

JM Siasat of GMA News Online is nominated as one of the 3 Filipino sports journalists for covering the combat sport of MMA.

Mike Murillo is a senior reporter for Business World who has covered various sports including MMA.

Santino Honasan is a sub section editor and writer for ABS-CBN Sports, and completes the three-nominees for the category.

The Filipino MMA personalities will be recognized as part of the nominees in 16 different categories of the Global Martial Arts Awards scheduled to be held at the JW Marriot Hotel in South Beach. 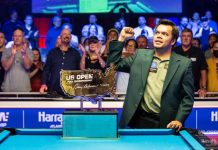 4 Filipinos in final 16 at US Open Pool Championship