The Philippines’ largest and deepest oceanarium has opened next to SM Seaside City Cebu.

Cebu Ocean Park, the first marine theme park in the Visayas, boasts of a larger and deeper water volume than that of Manila Ocean Park.

The new world-class marine animal-themed complex was created by the same team that pioneered the Manila oceanarium in 2008.

Cebu’s Oceanarium occupies a 1.5-hectare area within the South Road Properties in Cebu City. It opened to the public on trial run starting August 24.

The new tourist attraction in the central Philippines is comprised of world-class educational displays and encounters namely, the Jungle Trek, Creepy Critters exhibit, the Seven Seas exhibit, and the Interaction Center for an Aquanaut experience.

The Oceanarium itself boasts of a 360-degree viewing tunnel with a mermaid show at the Deep Tank Lagoon.

Cebu’s efforts to affirm its reputation as a top destination for travelers include its bid to be the World’s Arnis capital, the innovations at multi-awarded Mactan-Cebu International Airport, and the creation of a Malacanang sa Sugbo Museum.

Marvel introduced its Filipina Superhero, Wave, and its co-creator Leinil Yu who incidentally grew up in Cebu, in a homecoming event last weekend at SM Seaside City Cebu to celebrate 80 years of Marvel Universe.

SEND well wishes in the comments below to the people of Cebu for their world-class travel destinations! 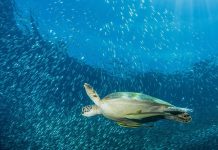