‘Love Of My Life’ co-stars Rhian Ramos and Djanin Cruz took part in the Light it Forward video challenge which provides solar energy to impoverished areas in the Philippines.

The Liter of Light’s video challenge hand-builds solar lamps to be distributed to needy communities while honoring the nation’s frontliners through the challenge. The solar-building challenge offers messages of encouragement as a tribute to the unending efforts of essential workers in their fight to contain the virus.

Light it Forward asks solar challengers to dedicate a hand-built solar lamp to a frontline worker who has made a positive impact on their lives during the COVID-19 pandemic.

LIGHT IT FORWARD video challengers get to assemble their very own solar lights by hand for 20-30 minutes. Solar advocates are urged to share the challenge to their friends and family to keep building more lamps and raise awareness for an estimated 20 million Filipinos still living without modern electricity.

The proceeds and solar lamps generated from the challenge will be donated to communities in need.

Kapuso actress Rhian Ramos and Love of My Life co-star Djanin Cruz have responded to the noble cause by dedicating their time to build solar lamps for homes without light. Watch these actresses Light it Forward for millions of Filipinos living in the dark. 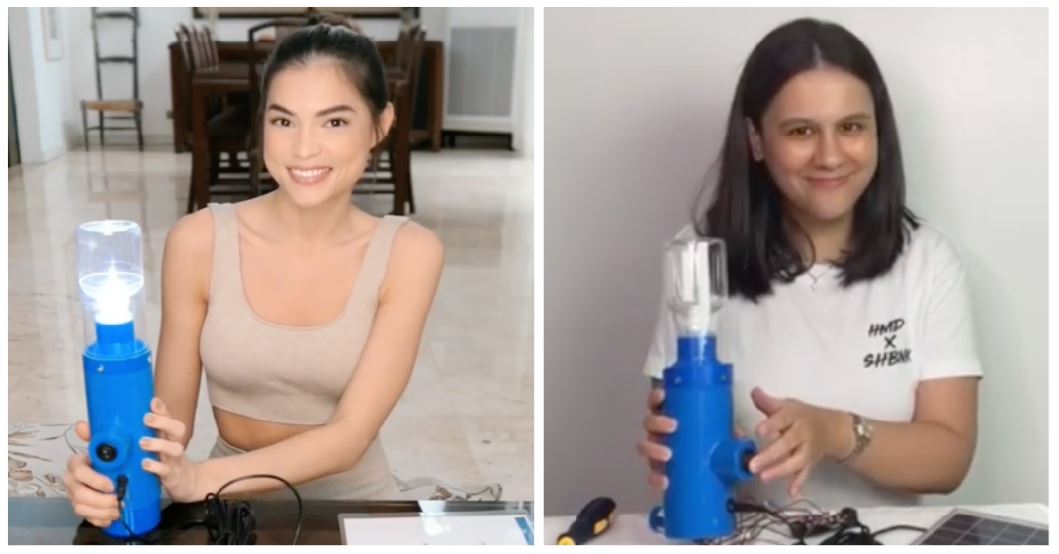 Kapuso sweetheart Rhian Ramos is famous for her roles in hit GMA ‘teleseryes’ including The Rich Man’s Daughter, Love of My Life, Captain Barbell, and more.

Love of My Life premiered in February and stars Rhian Ramos as Kelly along with actors Carla Abellana (Adelle), Mikael Daez (Nikolai), and Tom Rodriguez (Stefano) in a tale driven by family, romance, and revenge.

The famous Kapuso beauty readily took on the Light it Forward challenge to benefit many Filipinos without electricity.

“Did you guys know that there are still so many communities in the Philippines living without light?” she asked viewers in her video challenge posted on September 9, 2020.

Rhian Ramos explains that there are still so many people who live in energy poverty around the world. The Liter of Light Foundation offers an unconventional solution to a shared problem through their advocacy which provides high-quality solar lamps to those most in need.

“That is why Liter of Light has created this: a solar light kit. It’s got a solar panel, a pipe, and an old water bottle,” the actress continued.

The lighting kit comes with the requisite tools to help challengers build solar-powered lamps of their very own. Light it Forward’s solar lights are also made from recycled materials.

Liter of Light established the Light it Forward challenge in the Philippines to expand their reach by raising awareness for the energy-poor and building more lamps for donation through the help of its solar advocates such as Ramos and other Philippine personalities.

The actress was proud to make a difference for households without light. Light it Forward solar lamps can illuminate homes for up to twelve hours a day in the span of five years.

“I made that! And you can too. For every light that you make, a community or a family can live with this for five years for twelve hours a day,” Ramos stressed.

The famous celebrity also encourages others to try and build solar lamps by contacting Liter of Light’s official social media channels on Facebook or Instagram. According to the actress, the 20-minute solar challenge was actually therapeutic and easy.

Rhian Ramos responded to the challenge issued by her fellow solar challenger and Love of My Life co-star Vaness Del Moral.

Actress Djanin Cruz is the daughter of veteran actor Tirso Cruz III. The actress is known for her work in ABS-CBN’s Ipaglaban Mo, GMA’s Sinner or Saint, and Love of My Life in which she portrays a supporting role alongside fellow solar advocate Rhian Ramos.

Djanin Cruz began her video challenge by telling viewers that the Liter of Light Foundation has just sent her a package containing the materials to build a solar lamp. The solar building kits received from Liter of Light already comes with everything challengers need to assemble a lamp by hand. She also shares that the foundation has sent her a video posted on their Youtube channel to guide her in its assembly.

The actress explains that the challenge is part of a solar movement started by Liter of Light to bring eco-friendly lighting to homes and villages without access to electricity.

Light it Forward’s solar lamps benefit the environment by replacing traditional sources of lighting villagers depend on such as kerosene lamps which are often hazardous and costly to use. Each hand-built solar light made from recycled material reduces carbon emissions by at least 1,000 kg.

The ‘Love of My Life’ actress dedicates her effort to poor villagers with limited or no electricity in their homes.

The actress posted her video challenge on August 19, 2020. She was challenged by her famous brother Bodie Cruz and cousin Sunshine Cruz.

Support your favorite Kapuso actresses in their joint effort to defeat energy poverty by joining the Light it Forward solar movement.

The celebrities Rhian Ramos and Djanin Cruz are part of the fifth batch of famous Philippine personalities who have taken part in the solar advocacy.

The APSIPA-awarded Light it Forward campaign is led by the Liter of Light Foundation in partnership with GoodNewsPilipinas.com and the Rotary Club of Makati Business District.

SEND CHEERS in the comments below to ‘Love Of My Life’ co-stars Rhian Ramos and Djanin Cruz for joining the Light it Forward Challenge.