The Philippine National Artist for Music first went on Facebook live at 8 p.m. on March 18, 2020, and again on March 19, in a musical performance reminiscent of his iconic ABS-CBN television show, Ryan, Ryan Musikahan.

As Cayabyab was playing music and interacting with viewers on Thursday night on Myran Etorza’s account, Bayanihan Musikahan page posted the update on pledges that came from the likes of the foundations of SGV, Philam, Peace and Equity, Kris Aquino, PLDT Motolite Balik Baterya.

Bayanihan Musikahan mover Marian Pastor Roces also posted an update that 80 artists have already signed up for the concert fundraisers that the group estimates can last for weeks.

Rey Laguda of the Philippine Business for Social Progress is the team’s collaborator for the collection and distribution of donations.

“Beneficiaries are urban poor communities in various cities of Metro Manila, that are reached by the organizations Samahan ng Nagkakaisang Pamilyang Pangtawid, Likhaan, and Caritas Manila.

“Donations will be used to purchase “Manna Packs” containing rice, munggo, and other nutritious stuff; and “Ligtas Covid Kits” for medical and health supplies. These are already tried and tested by Caritas Manila. We only have to upscale the numbers quickly. We need tens of thousands every day for many weeks.

“We will also aid local government units in creating barangay quarantine spaces to stave off contagion and to augment the medical services infrastructure of Metro Manila—if necessary provided by volunteer medical professionals from the same or nearby barangays.”

Bayanihan Musikhan gathers Pinoy musical artists online through marathon singing, “as a way to bring the nation together in the spirit of Bayanihan and to direct it towards aiding our most vulnerable communities. The call of the moment: to give back, pay forward, and give ourselves a shot at a new kind of rave. Make compassion the antidote to COVID-19!” 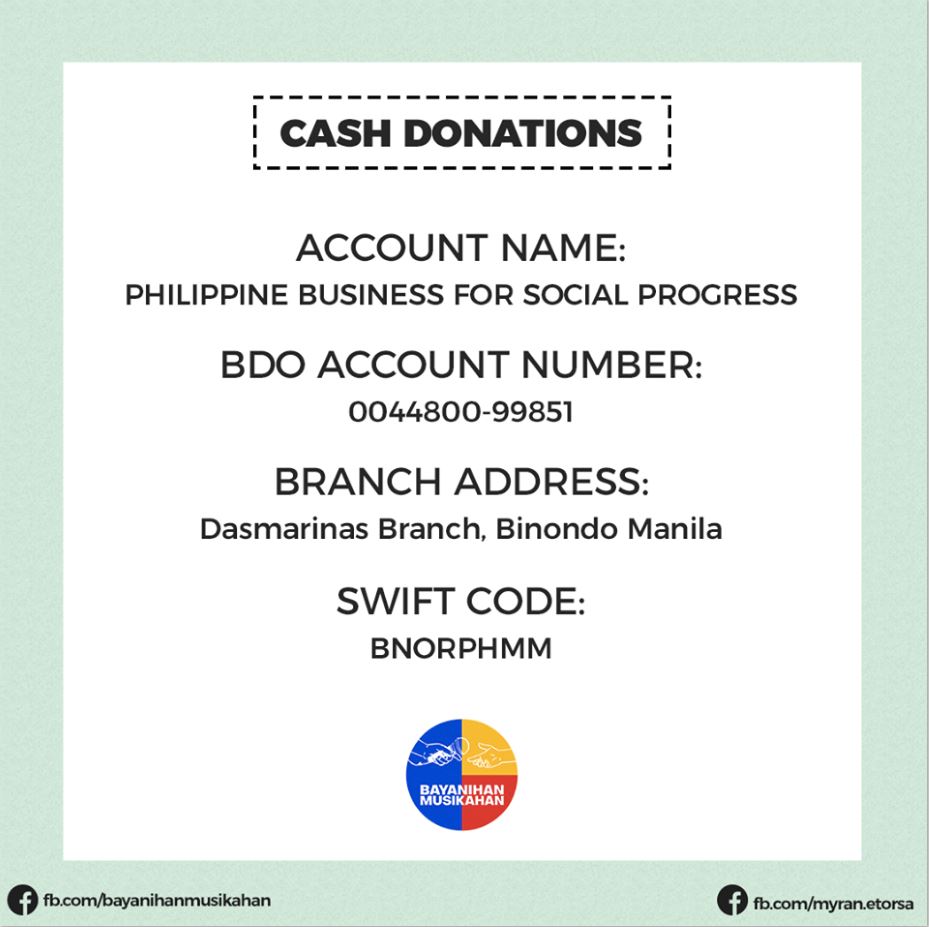 The Philippines’ National Artist for Music, Ryan Cayabyab, will launch this evening the “Bayanihan Musikahan” Facebook (FB) live concerts to raise funds for the victims of the COVID-19 pandemic.

Cayabyab, fondly called in the local entertainment industry as Mr. C, went on Facebook Live for the first time on Wednesday, March 18, 2020, to announce his new passion project.

Mr. C was seen on the FB live video playing music on his piano, reminiscent of his popular “Ryan, Ryan, Musikahan” musical show on ABS-CBN television in the late 80s to mid-90s. The maestro interacted with the FB live video viewers by asking them to give him 4 notes for a melody and playing requests for his iconic compositions such as “Tuwing Umuulan”, “Mamang Kutsero”, and “Araw Gabi”.

Cayabyab then talked about Bayanihan Musikahan. “Some friends of mine got together and decided to put resources together to create a project to raise funds for the most vulnerable sector of our society,” Ryan Cayabyab said.

(While you are watching FB live, relaxed in your own homes, watching on your phone, you know that even more people need help.)

(While it is true that a lot of our artists are now without work, the fact remains there are people who are more vulnerable than us, they who work every single day just so they can bring food to the table.)

(We thought of putting up this FB live concert which will actually start on Monday, March 23.)

The FB live concert will have musicians going live on their Facebook pages as they ask for donations for the concert’s beneficiaries.

The Ramon Magsaysay Awardee and University of the Philippines Conservatory of Music professor also said he will be revealing more details about the concert fundraiser in the coming days.

These artists have confirmed to perform on Bayanihan Musikahan as of this writing:

SEND CHEERS in the comments below to Ryan Cayabyab and the Bayanihan Musikahan team for this initiative to use their talent while at home to help the victims of COVID-19!