“Shopping is More Fun in the Philippines” as the retail industry remains robust amidst closure of some malls and stores in some parts of the world.

In contrast to many large format stores rightsizing and shopping centers closing down in many parts of the world, retail in the Philippines remains vigorous and upbeat, said SM Supermalls Chief Operating Officer Steven T. Tan at the Nikkei Business Philippines-Japan Investment Forum in Japan.

“Unlike how it is in many parts of the world, retail in the Philippines is vibrant, upbeat and full of opportunity,” Tan said in his address before a gathering of 500 CEOs and business leaders in Tokyo.

Tan credits the retail industry growth to strong forces of consumer and market activities complemented by government’s massive infrastructure push that are directly impacting consumer sentiment in the Philippines.

The country ranked second-highest in consumer confidence in the world as of the end of September 2019.

“Optimism to spend among Filipinos is more than just a sentiment. We see it translating into actual consumer behavior, especially retail,” Tan added.

With robust consumer sentiment and activity, total retail sales in the Philippines grew 6% in 2018.

“It is interesting to note how brick-and-mortar retail continues to dominate and how it will continue to grow alongside the growth of internet retailing in the Philippines. The Philippine environment is conducive to all kinds of retail, both digital and brick-and-mortar as we look at opportunities in both channels,” the SM Supermalls head added.

With such forces at work and to borrow the government’s tourism mantra, retail is still “more fun in the Philippines” due to optimistic consumers and a thriving mall culture that continue to draw foreign retailers.

In particular, for the past five years, Mr. Tan said there has been a growing number of foreign brands entering the market particularly in Food and Beverage as well as Clothing and Apparel. The attractiveness of the Philippine market to foreign retailers is further enhanced by an average rental rate that is highly competitive when compared with other ASEAN countries such as Vietnam and Indonesia.

He encouraged Japanese retailers to consider three immediate opportunities in the Philippines: Food, Beauty, and Health & Well-being as there is growing interest in Japanese brands in the malls.
The Nikkei Business Forum had the theme, “Inclusive Growth of the Philippines and Partnering Philippines for Japan/ASEAN Transformation”.

With reports by Ronarose Mae Vicencio.

SM Supermalls won the Asia Pacific Grand Stevie Award of 2019 and the prestigious Leed Gold for SM Aura. The homegrown mall chain has innovated in various customer service experiences like the introduction of the first robot mall customer attendant.

SEND cheers to the Philippine retail industry as it faces a rosy picture in the new year! 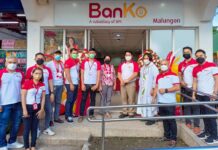 Are you self-employed? Check out how microfinancing BanKo can help you