The Popular Filipino ball club, encouraged by its legendary “never-say-die 6th man” barangay crowd in the stands, stood its ground in the best-of-seven series against the Hongkong-based team which started on Christmas Day in 2022 and finished off the competition in Game 7, 114-99.

“I’m just happy to do it in front of this crowd,” Brownlee said in the PBA report.

“When I was traded, I dreamed of this,” said Malonzo.

The Gin Kings made early runs in the last game, erecting a huge lead in the first half, 61-39.

Barangay Ginebra kept driving to the basket, stretching its lead to as much as 28 points.

Barangay Ginebra’s newest crown adds to its historic titles, making it the league’s second-winningest team next to the team of San Miguel Beer.

SEND CONGRATULATIONS in the comments below to Barangay Ginebra for winning the PBA Commissioner’s Cup against the Bay Area Dragons of San Francisco, USA! 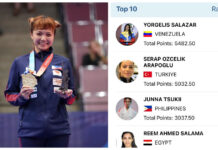