The University of the Philippines (UP) was ranked for the first time among the world’s top 100 universities for the performing arts subject by Quacquarelli Symonds World University Rankings (QS WUR).

The QS WUR rankings released on March 4, 2020, showed the University of the Philippines as the only Philippine school that entered the 51-100 ranking of the 2020 QS World University Rankings By Subject in the Performing Arts, a listing led by Juilliard School in the United States.

The Philippines’ leading state university also ranked in the Top 100 for the subject of Development Studies, its second year to appear at the top of the subject rankings.

According to the U.P. report released on the same day, “This is the first time the national university has been ranked for Performing Arts; and the second time in two consecutive years for Development Studies, in both years placing at the top 100.”

UP was ranked in 3 out of 5 broad subject areas, ranked in 18 subjects, and scored in 35 subjects in the 2020 QS World University Rankings by Subject which ranked 1,368 institutions in 48 subjects.

The Performing Arts high ranking was based on a survey of 94,000 academics and 44,000 global employer votes.

In addition to academic and employer reputations, the Development Studies ranking added two more criteria based on citations of published papers.

UP also obtained debut ranking in Electrical and Electronics Engineering, and Biological Sciences, and regained a ranking in Linguistics.

UP’s other QS World rankings include:

Overall, UP Diliman was given the following ranking:

UP Diliman is not only the home of diverse colleges, offering 94 graduate and undergraduate courses, it also runs several centers of research, many of which have been declared by the Commission on Higher Education as National Centers of Excellence.

Quacquarelli Symonds (QS) is a leading global higher education company offering a range of products and services for universities and students.

University of the Philippines Diliman was also the country’s top university according to the QS World University Rankings for 2019, notching its highest ranking in the Top 33 percent and consistently scoring high in the rankings for educational institutions worldwide.

The University of the Philippines has displayed excellence not only in academic world rankings but also in the music arts with notable performances by the UP Singing Ambassadors, the UPLB Choral Ensemble, the UP Madrigal Singers, and the UP Concert Chorus. The UP Symphony Orchestra, the official system-wide orchestra of the University of the Philippines, was founded in 2018.

SEND CONGRATULATIONS in the comments below to the University of the Philippines community for its breakthrough ranking in the Performing Arts! 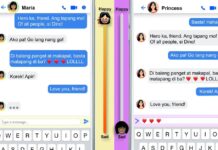