The 2018 Walk Of Fame (WOF) Philippines awardees, whose names have been immortalized and permanently carved on stars in the grounds of the Eastwood City Central Plaza in Libis, dedicated their newly unveiled stars to movie and television workers behind the camera.

The nine Filipino film and television personalities given the tribute by the German Moreno Foundation on the December 10 red carpet event that annually honors Filipino icons of entertainment, arts, and culture, personally accepted the recognition and shared the limelight with their industry colleagues.

One by one, each inductee was called to unveil their brass star and bronze plaque before fans gathered at the Eastwood Mall grounds. The Filipino personalities were visibly touched at seeing their names carved on the WOF, eagerly touching their stars, taking selfies, waving to fans, and gamely posing for the media present at the unveiling.

Leading the inductees was 2015 Miss Universe Pia Wurtzbach, the beauty queen from Cagayan de Oro who brought home the crown after 42 years.

In her acceptance speech Wurtzbach, the first Filipino to be featured on Madame Tussaud’s Wax Museum in Hongkong, thanked the German Moreno Foundation and shared the award to people who tirelessly work with her behind the camera.

“You guys see us, artistas ina-idolize ninyo, but really there’s a full team behind us for every project that we do,” said Wurtzbach. 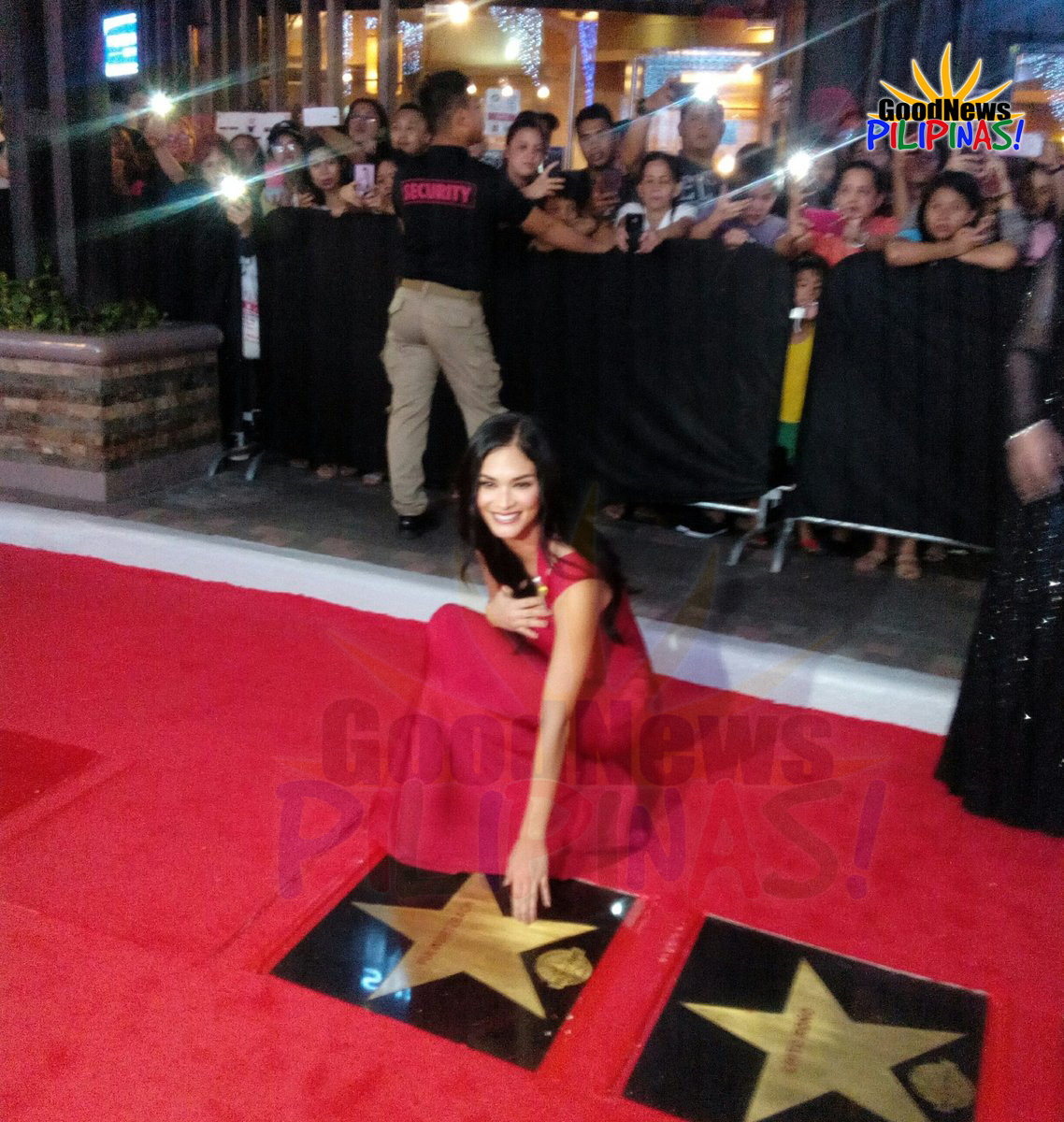 British Broadcasting Corporation (BBC) Filipino news anchor Rico Hizon who has distinguished himself as the only Southeast Asian male anchor to work with three of the most prestigious global news networks – BBC World News, CNBC Business News, and GMA News and Public Affairs – shared the spotlight with his colleagues.

“I would like to dedicate this as well to the men and women behind the cameras, the producers, the reporters, the writers, because without them I wouldn’t be here on stage. I would like to share this award with them,” Hizon said as he capped his acceptance speech by delivering his news anchor spiel for BBC.

In an exclusive interview with the GNP team after he unveiled his star the Asian Television Awardee who has been reporting the news for 30 years reiterated, “It’s not me alone who made this happen but with men and women who helped me in (local) broadcasting and in international broadcasting arena.” 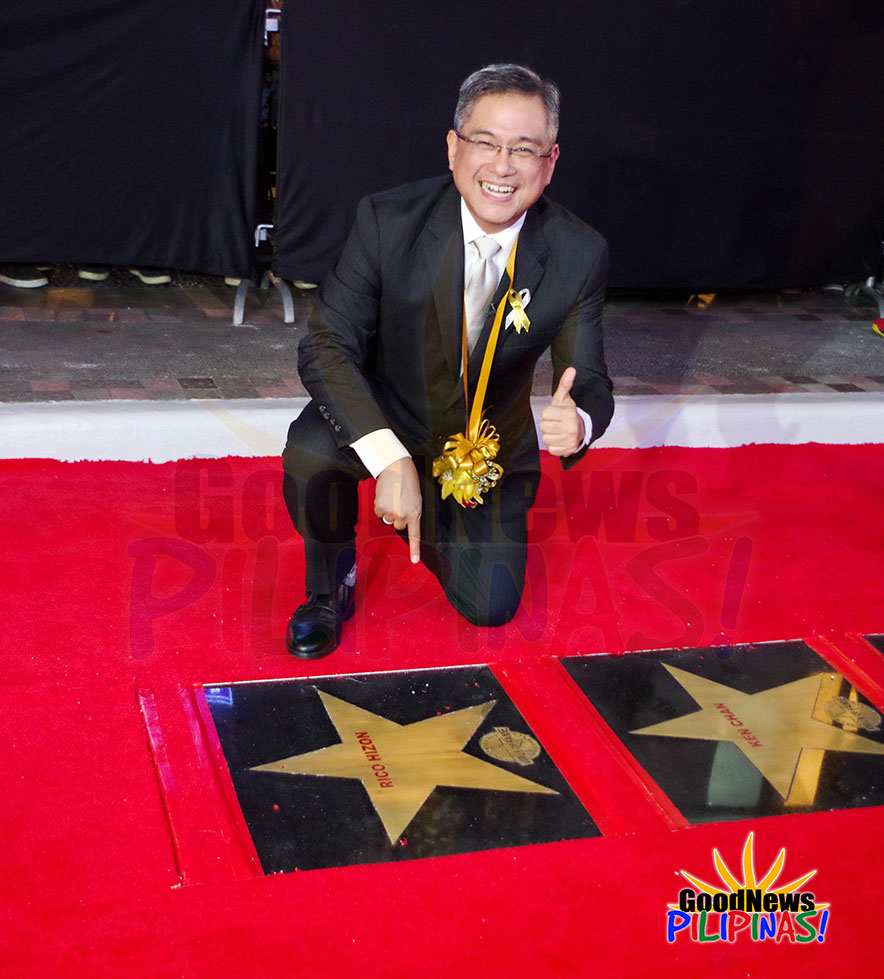 Award-winning director Chito Roño of films Emir, The Healing, Feng Shui and Dekada 70 is also one of this year’s WOF inductees. Director Chito Roño’s Signal Rock is the Philippines’ entry to 2019 Hollywood Oscars.

In an interview with the GNP team at the WOF, the film director who came to the awards night despite feeling ill said he was happy Signal rock is getting the world’s attention.

“Ang hope ko lang is mapansin ang Pilipinas (My hope is the Philippines gets noticed). I’m positive kasi we were also noticed by the Golden Globe,” Roño said. 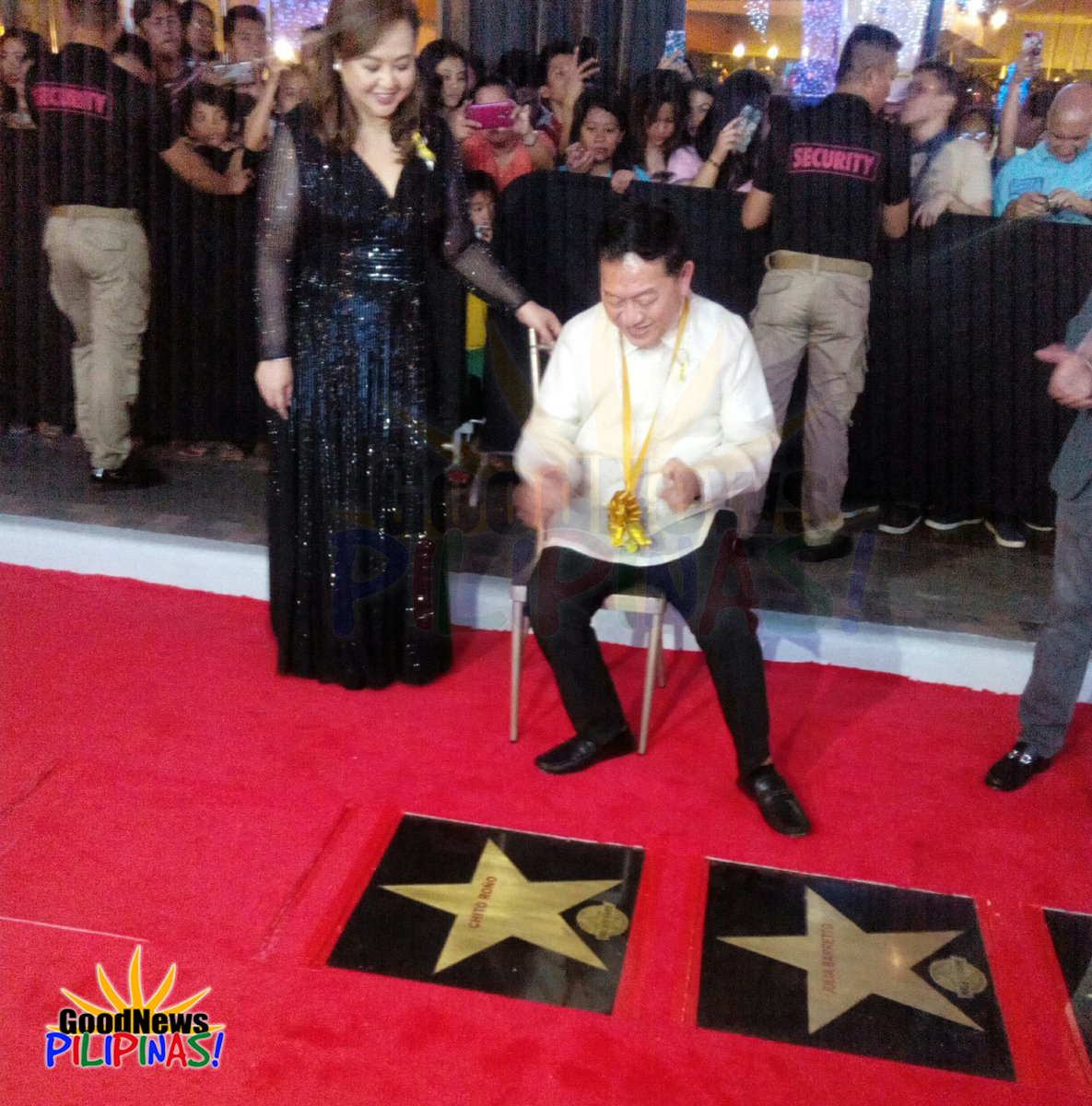 Derek Ramsay was also inducted into the WOF this year for his contributions in the movie industry where he has received several Best Actor awards.

“I am proud of myself, I am appreciated this way. I know I haven’t contributed as much as the other stars but it’s nice to know that stuff and work you got all years has been appreciated,” Ramsay told GNP. 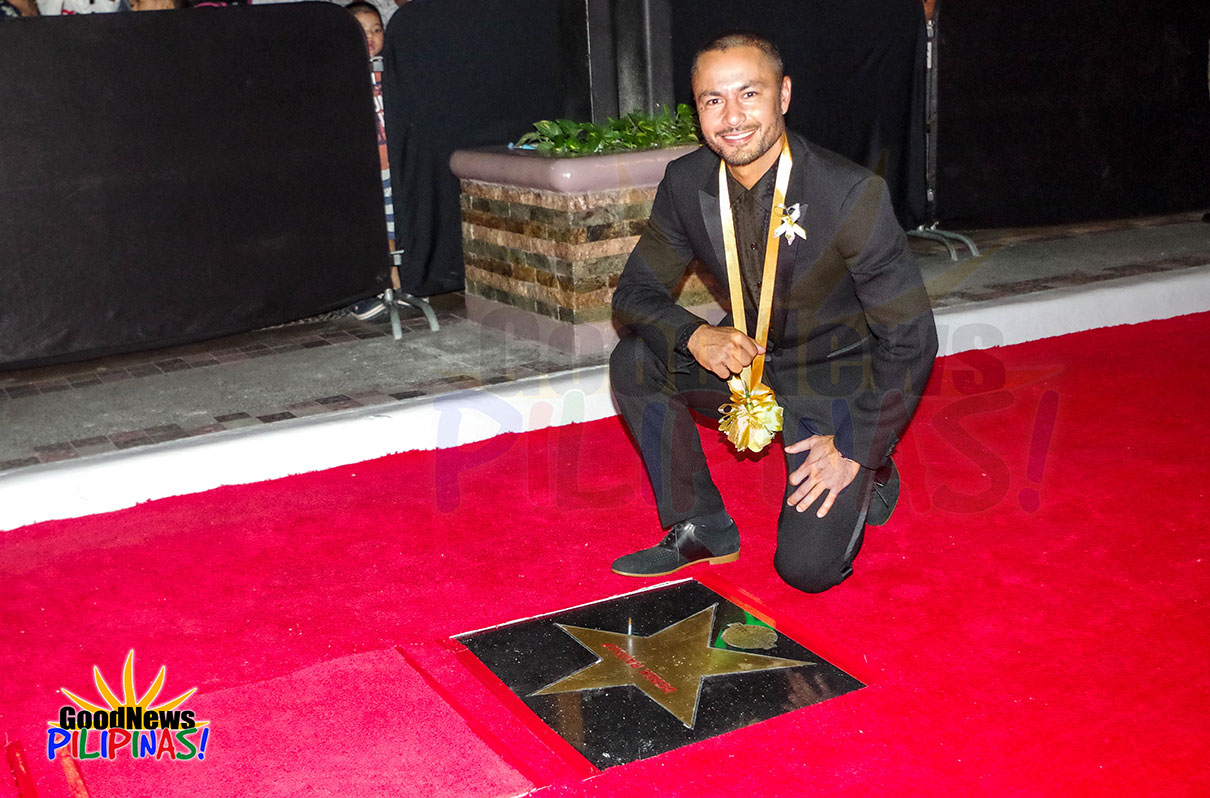 Other WOF awardees present were:

This year’s Walk of Fame inductees pledged to support the Movie Workers Welfare Foundation (MOWELFUND), an organization that champions the welfare of the Filipino film industry workers.

To honor all the people working in the film and television industry, the German Moreno Foundation displayed gold and silver ribbons said to represent “the two facets of the show business industry. The gold signifies the happy faces in the spotlight while silver means sad faces after all the cameras are turned off.”

Federico Moreno, son of the late German Moreno and president of the German Moreno Foundation and Walk of Fame Philippines, shared how he valued the awards event, “It will be a big disservice not to continue my father’s legacy project. It has always been his dream to honor the stars that have made a significant contribution to the entertainment industry.” 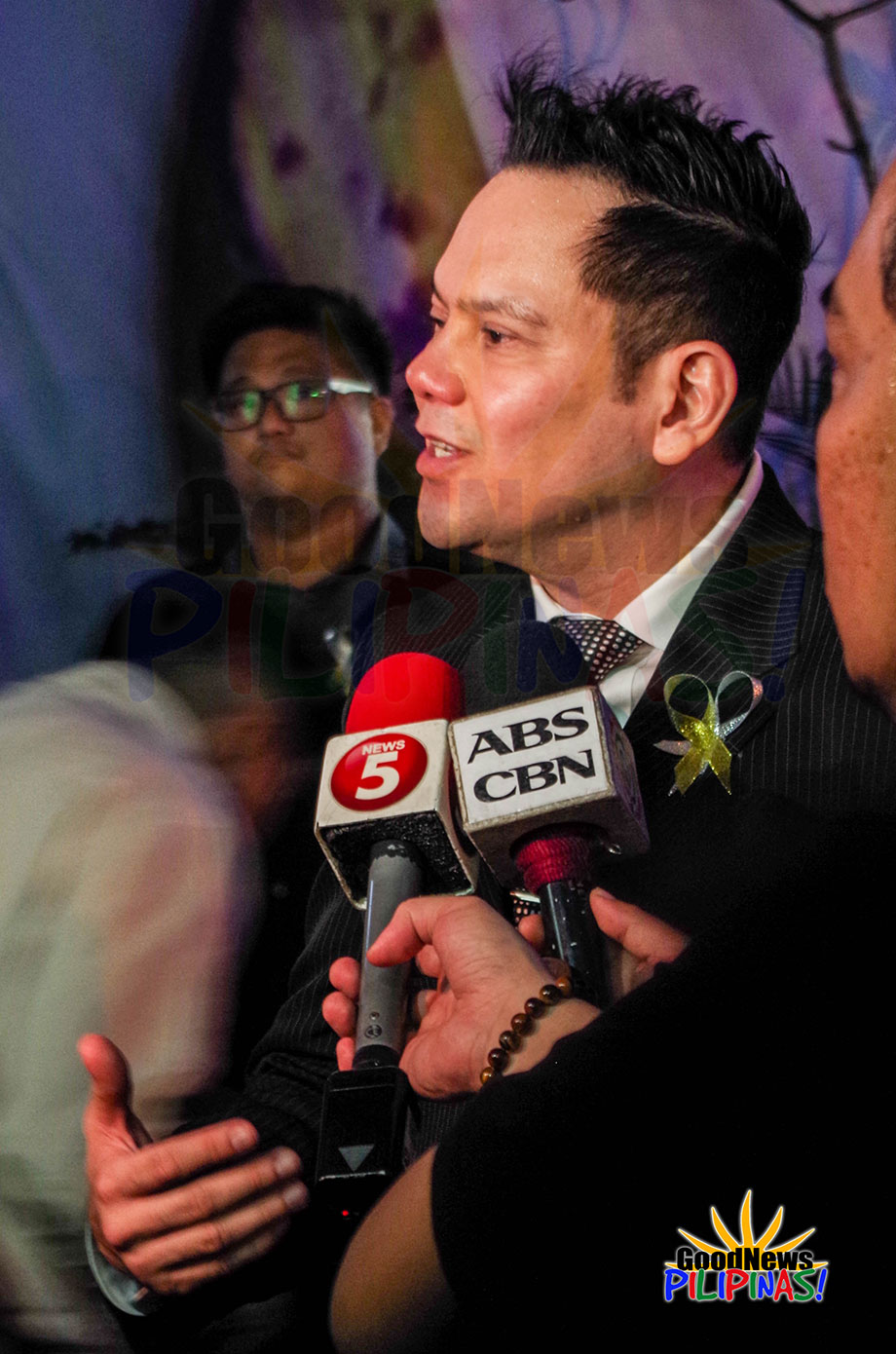 Hosted by “Walang Tulugan” alumni Jackie Lou Blanco and John Nite, the annual Walk of Fame ceremony is the German Moreno Foundation’s way of giving recognition Filipino artistry and excellence and serves as inspiration to the younger generations of actors, athletes, directors, musicians, and TV and movie personalities and workers.

The 2018 Walk Of Fame Philippines honorees join a prestigious list of Filipino icons who were honored by the German Moreno Foundation for “their exceptional contribution, timeless appeal and unwavering passion for their respective crafts… with the shining memorabilia that serves as a testament to the rich heritage of homegrown talents in the Philippines… and pays homage to the golden Filipino tradition to be remembered and admired by this generation and the next.” 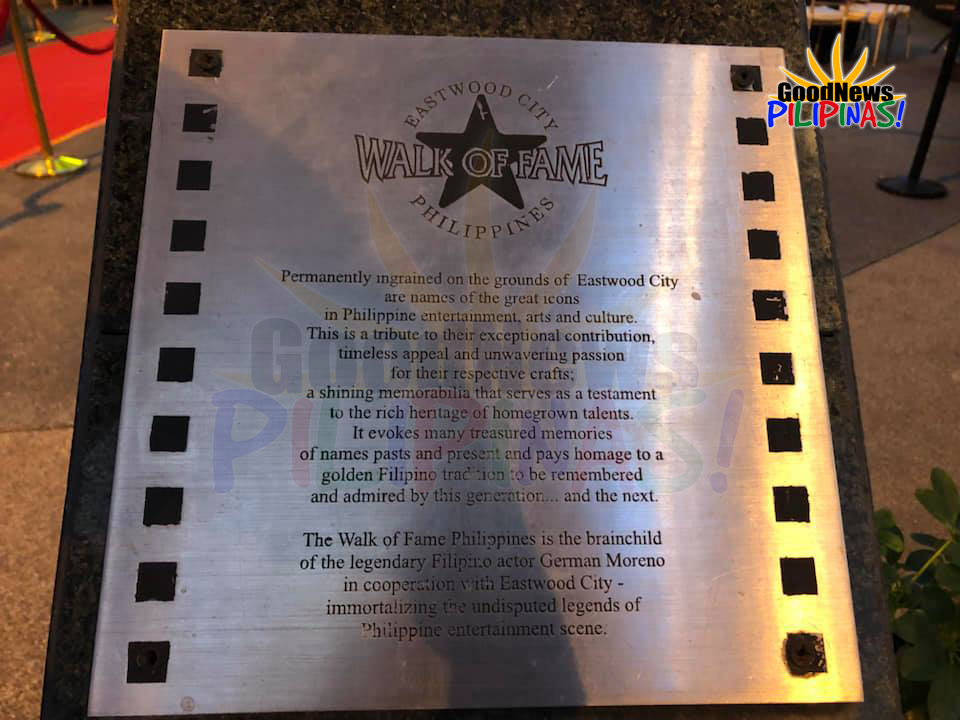 The 2018 WOF Philippines awardees bring to 352 the total number of film and television personalities given their own stars by the German Moreno Foundation since 2005 for greatly contributing to the country’s movie, television, news and public affairs, radio, music, theater industries.