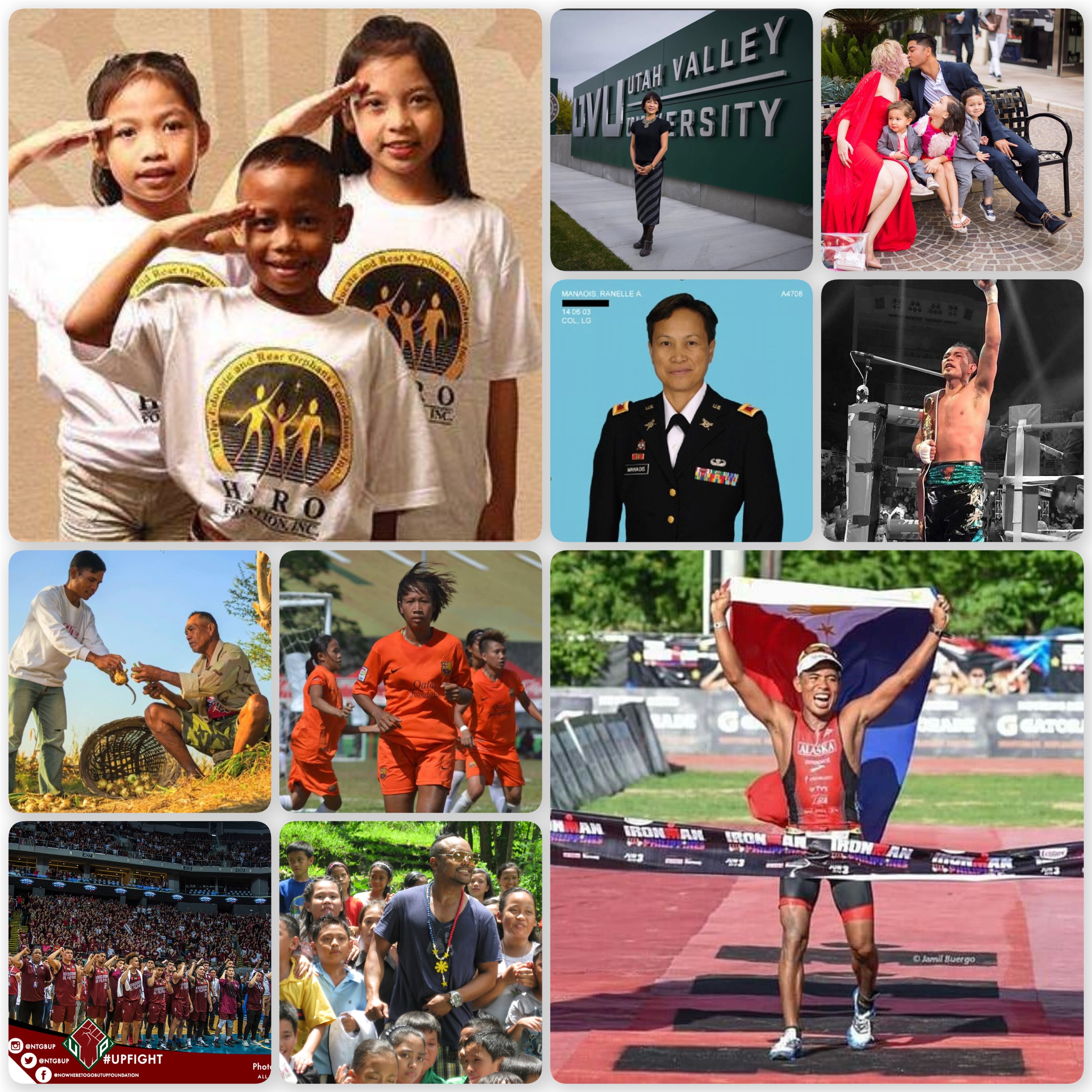 Inspirational stories that give hope, of survival despite odds, and of the Filipino “bayanihan” spirit of helping ease each other’s burdens are regular fare in the Philippines and elsewhere in the world where there are Pinoys. As they face a myriad of challenges in various degrees, Filipinos are known to survive on determination.

GoodNewsPilipinas.com recalls the year’s top stories of inspiration that show how the Filipino has risen like the phoenix bird over and over again, with faith, hope, love and help from friends.

In the list is a struggling college basketball team which became silver medalists in a national competition after being revived by the unity of its alumni community, an international hip hop star who overcame being legally blind and is now helping fellow Filipinos reach their dreams, a champion triathlete who was once an ice delivery boy, a poor illiterate provincial girl who is now the president of an American university, an international boxing champion who comes to the Philippines to help disaster survivors, a peanut vendor who became the 1st Filipina FIFA referee, a fashion designer who braved the odds against him, the 1st Filipina West Point graduate who battled discrimination, farmer entrepreneurs who are being helped by a homegrown international food chain, and military orphans who receive educational assistance from a foundation.

These top stories can best serve as inspiration for Filipinos to keep going in the coming year.

Here are the GNP Top 10 Inspirational Stories for Filipinos:

1. Why the UP vs Ateneo UAAP championship series brings out the best in Pinoy fandom

The University of the Philippines Men’s Basketball Team hurdled over difficulties to make its first appearance in the University Athletic Association of the Philippines finals after 32 years. The UP Fighting Maroons, winning only 13 of their 126 games from 2007 to 2015, were clear underdogs to the defending champion team Ateneo de Manila University Blue Eagles.

The silver medalists of the 81st University Athletic Association of the Philippines men’s basketball series arose like a phoenix bird on the back of the UP alumni community which had banded together, mainly through the Nowhere To Go But UP Foundation, to provide financial and logistical support to the UP ball club which struggled to be able to practice in less-than-ideal gym situation, went to their games hungry and on public transport, and were even at one point, homeless.

2. Apl.de.Ap gives back through scholarships for creative Filipinos

Apl.de.Ap gives back through scholarships for creative Filipinos

Black Eyed Peas’ Apl.de.Ap is on a mission to give back to fellow Filipinos with scholarship programs offered to creative students through The Creative Innovators Programme. The Filipino member of the world-famous American song and dance group was born Allan Pineda Lindo to a Filipina mother and an African-American father and was himself a beneficiary of foundation support from the Pearl S. Buck Foundation, an organization dedicated to the well-being of Amerasian children.

Apl went to America after being diagnosed with a rare lifelong condition called nystagmus -which makes his eyeballs constantly vibrate, resulting in chronic blurry vision-and severe nearsightedness. Apl’s vision is so poor that even with optimal contact lenses for his condition (his prescription is -11.0), he’s legally blind. Apl then went on to co-found the Grammy-award winning group Black Eyes Peas.

The Filipino Flash made a detour on his way to a ring fight in Northern Island for stopover in Iloilo to assist in the donation of 100 homes to Typhoon Yolanda survivors courtesy of the Greg Secker Foundation, a non-profit foundation established to positively improve the quality of life of people around the world.

Philippine-born and raised Dr. Astrid S. Tuminez overcame her impoverished beginnings to become the first woman president of Utah Valley University. Dr. Tuminez had a hard life being one of seven siblings, not being able to eat regular breakfasts as a child, having only one pair of socks and when it rained she plugged the holes in her school shoes with lollipop wrappers.

Tuminez testifies how profoundly education had changed her life when she was 5 years old when the Catholic nuns in the city invited her and her sisters to attend their school. Dr. Tuminez has risen out of her humble beginnings and now holds a bachelor’s degree from Brigham Young University, a master’s degree from Harvard University, and a doctoral degree from the Massachusetts Institute of Technology.

The 2018 Asian Elite Champion at the first full Ironman triathlon race in the Philippines learned to use the bicycle and endure hard work when he used to work as an ice delivery boy to help his family finances. It was August Benedicto’s first time to race the Ironman. He had previously won local and international cycling events.

The first Filipino woman to become a Fédération Internationale de Football Association (FIFA) referee was a young girl who had to stop schooling and sell peanuts and other snacks to help her family amidst financial difficulties.

Jhesa Mae Palma-Kaatz managed to overcome her impoverished situation to bring with her a wealth of experience playing for the Philippine Football Federation (PFF) before she was officially recognized by the international football association.

Disney-recognized Filipino fashion designer Nephi Garcia, better known as Designer Daddy, bravely followed his passion for designing clothes despite his parents’ disapproval when he was young. He, however, received support from his sister with savings from her allowance to buy him fabrics and sketch pads which allowed him to continue his passion without his parents knowing.

He eventually met a woman – who became his wife – and she believed in his passion and talent and encouraged him to pursue a career that makes him happy. The family went through a rough patch when Garcia quit his job but because of Bethanie’s support the then-budding designer gained the strength to focus on doing what he loves.

8. First Filipina graduate of West Point continues to serve even after retirement

The first Filipina West Point graduate faced gender and ethnicity as she entered the United States Army at a time the belief that females did not belong at West Point was still strong, and continued to experience the discrimination throughout her 30- year military career.

Colonel Ranelle A. Manaois overcame gender and ethnicity issues at West Point and the Army with a “Can Do” attitude and mindset from God, family, and being Filipino-born as sources of her foundation of strength.

Typical Filipino farmers like Wencelito Gomez who have been in constant struggle to make a living finding it difficult to find a steady market for crops are being helped by Jollibee Foods Corporation.

Children of Filipino soldiers who gave up their lives in defense of the Philippines and its people are being helped by full scholarships from the HERO (Help, Educate, and Rear Orphans) Foundation.

HERO Foundation was established in 1988 by the late President Corazon C. Aquino to help scholars with the cost of books, uniform, school supplies, and at times supplementing their tuition fees. In 2018 HERO Foundation scholars were given full college scholarship for tuition, board and lodging. Allowances for books, school supplies, food, uniform as well as transportation.