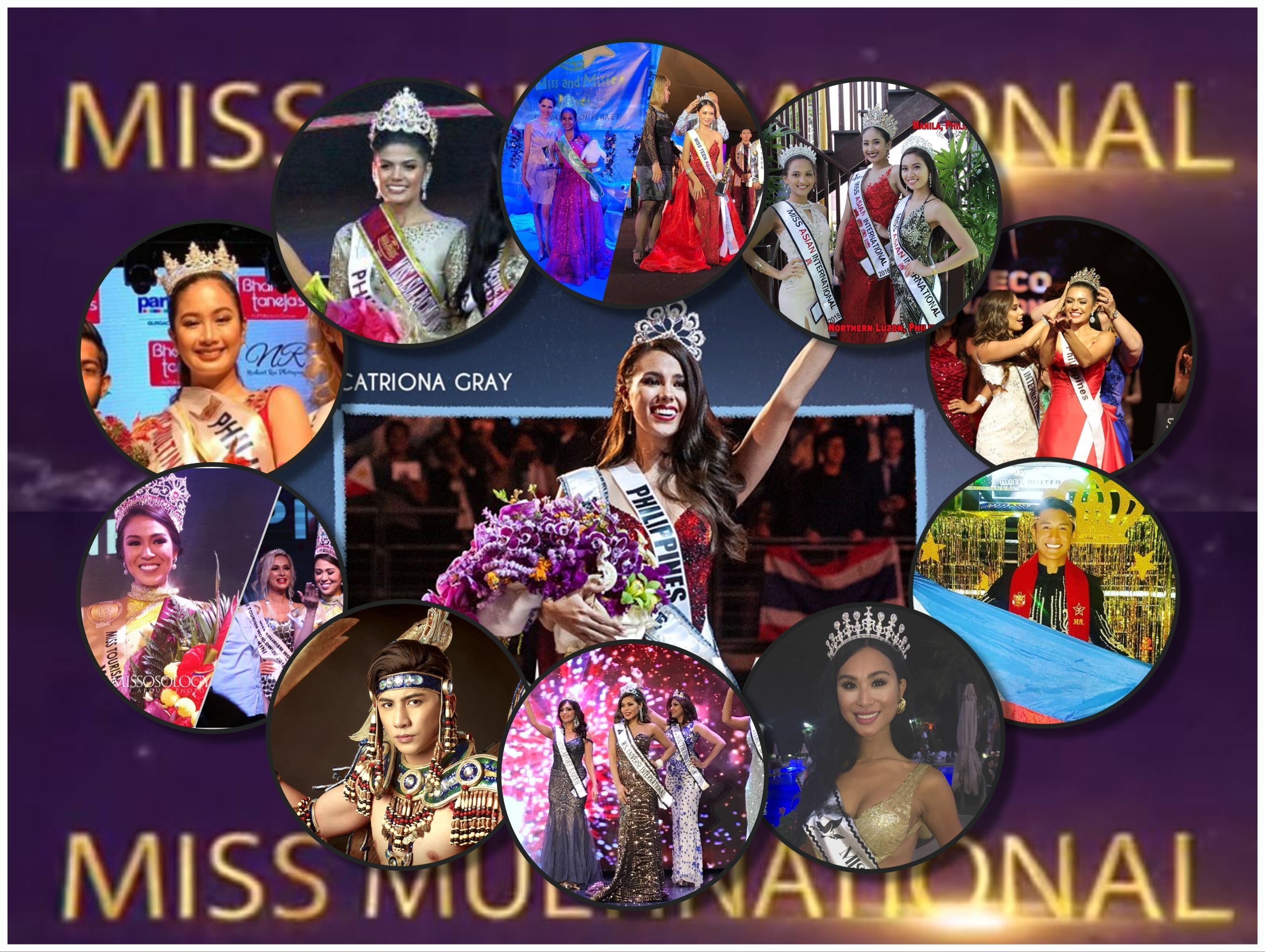 Filipinos successfully raised the flag in the international pageant arena in 2018, successively winning crown after crown almost every month beginning February until December – rightfully claiming the year 2018 as, still the pageant year for the country.

The Philippines, now considered a pageant powerhouse in Asia and in the world, secured 12 international crowns and titles, adding to the long list of winners, titles and awards the country has won in the entire history of pageants.

Here are the international Filipino pageant title holders who won the highest placement in their respective pageants for the year 2018:

The Miss Multinational pageant “focuses to discover the best models across the world.”

The second Filipina to win an international crown for 2018 is Gerina Chanel Ancheta from Dagupan City who bagged the Miss Asian International in its 5th edition held in March in Bangkok, Thailand.

The 24-year-old beauty queen featured provinces Southern Leyte, Davao Oriental, Palawan and Manila in her Eco video, and bested more than 70 candidates from around the world.

Thomalla highlighted the role of beauty queens in advancing environmental awareness and protection.

“I think that the most relevant thing that beauty queens can add to the world
is by raising awareness of their own causes. For example, Miss Eco International is raising the advocacy in sustainable tourism and protecting the environment… That is the main point of doing beauty pageants – by raising our voices to help the earth,” she said.

The Filipino public school teacher and model previously represented the country in Mr. Real Universe 2015 in Guayaquil, Ecuador but got his international pageant title on 2018.

In his Facebook account, Andrews expressed that all of his effort in exerted for the pageant is worth it.

Aside from being the first Filipina and Asian to win the title, Lim also bagged the Miss Summer Asia title and the Best National Costume Award which highlighted the Pintados tradition from her hometown, Samar.

In her Facebook post she said that winning an international pageant title was a dream that turned into reality.

“It was only a dream and now I am finally living the dream. Winning Miss Summer World 2018 in Tirana, Albania was the sweetest prize for all the hard work and sacrifices I have made. God indeed had a better plan for me. It took Him a while but He has given it to me at His perfect time.”

Kaycee Coleen Lim also won Miss Swimsuit UK and Best Model back in 2017 and is now in training to become a lawyer in United Kingdom.

The Ilocano recording artist based in Hawaii, Faye Tangonan, was crowned Ms. Universe International at the Ms./Mrs. Earth pageant in Las Vegas, Nevada.

Tangonan expressed her mission in joining the contest in her Facebook post: “I want to make a difference… be an inspiration to all! I want to show the world that being a beauty queen isn’t about being the fairest or the tallest of them all, but it is about having a brilliant mind, a beautiful soul and a pure heart.”

Faye Tangonan also made a remarkable media presence during the pageant and bagged the People’s Choice Award.

Teenage beauty Sofia Loreen Cruz won Miss Teen Planet 2018 in Sozopol in Bulgaria, adding another international crown for the Philippines in the 14th edition of the pageant.

Aside from Best in Talent award, the runway model also won her proposed advocacy – “I AM NOT FOR SALE” project that aims to create awareness about child abuse and child trafficking.

Miss Teen Asian 2018 is the Philippines’ Elizabeth Mae Legeza, a model and singer based in Victoria, Australia.

The Pinay teen beauty queen who was crowned in Thailand in July was also picked to receive the Best in Evening Gown, Best Charm, and Miss Photogenic (Gold) Photographer’s Choice Awards.

The country’s bet, Zara Carbonell successfully captured the Miss Tourism Worldwide crown. The pageant promotes “Tourism and Culture Exchange to the World” in its inaugural edition held in Batam, Indonesia in September.

As the title holder and now official ambassador of tourism for all the countries across the world, Carbonell’s tasks includes “promoting underrated places and promoting those already popular.”

The peace advocate beauty queen title holder from Sultan Kudarat bested 49 other candidates from around the world at the Newport Performing Arts Theatre in Resorts World Manila.

Bicolano George Reylor De Lumen beat 18 male delegates from all over the world and snagged the title of Mister Universal Ambassador 2018 in India.

He also received the Best in Speech Award and Best in National Costume Award with an Ibong Adarna-inspired costume masterpiece by designer Michael Barassi.

The 23-year-old Pinoy who hails from Bicol won Mr. Hannah’s World Tourism Philippines 2018 title in June, his ticket to officially represent the Philippines in the international pageant.

The country is still rejoicing after Filipino-Australian beauty Catriona Gray topped this year’s pageant season when she claimed the 4th Miss Universe crown for the Philippines.

Gray bested 93 candidates from all over the world and won the prestigious title in Bangkok, Thailand. She also championed the Filipino heritage, culture and arts in her wardrobe, from her daily outfit, national costume, and in her gown in both preliminary and final competitions.

Catriona Gray, who is an advocate for education, children’s welfare and positivity, is now in New York to officially start her duties as Miss Universe.